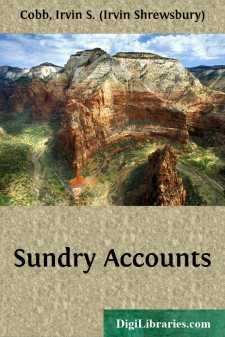 There was a house in this town where always by night lights burned. In one of its rooms many lights burned; in each of the other rooms at least one light. It stood on Clay Street, on a treeless plot among flower beds, a small dull-looking house; and when late on dark nights all the other houses on Clay Street were solid blockings lifting from the lesser blackness of their background, the lights in this house patterned its windows with squares of brilliancy so that it suggested a grid set on edge before hot flames. Once a newcomer to the town, a transient guest at Mrs. Otterbuck's boarding house, spoke about it to old Squire Jonas, who lived next door to where the lights blazed of nights, and the answer he got makes a fitting enough beginning for this account.

This stranger came along Clay Street one morning, and Squire Jonas, who was leaning over his gate contemplating the world as it passed in review, nodded to him and remarked that it was a fine morning; and the stranger was emboldened to stop and pass the time of day, as the saying goes.

"I'm here going over the books of the Bernheimer Distilling Company," he said when they had spoken of this and that, "and, you know, when a chartered accountant gets on a job he's supposed to keep right at it until he's done. Well, my work keeps me busy till pretty late. And the last three nights, passing that place yonder adjoining yours, I've noticed she was all lit up like as if for a wedding or a christening or a party or something. But I didn't see anybody going in or coming out, or hear anybody stirring in there, and it struck me as blamed curious. Last night—or this morning, rather, I should say—it must have been close on to half-past two o'clock when I passed by, and there she was, all as quiet as the tomb and still the lights going from top to bottom. So I got to wondering to myself. Tell me, sir, is there somebody sick over there next door?"

"Yes, suh," stated the squire, "I figure you might say there is somebody sick there. He's been sick a powerful long time too. But it's not his body that's sick; it's his soul."

"I don't know as I get you, sir," said the other man in a puzzled sort of way.

"Son," stated the squire, "I reckin you've been hearin' 'em, haven't you, singin' this here new song that's goin' 'round about, 'I'm Afraid to Go Home in the Dark'? Well, probably the man who wrote that there song never was down here in these parts in his life; probably he just made the idea of it up out of his own head. But he might 'a' had the case of my neighbor in his mind when he done so. Only his song is kind of comical and this case here is about the most uncomic one you'd be likely to run acrost. The man who lives here alongside of me is not only afraid to go home in the dark but he's actually feared to stay in the dark after he gets home. Once he killed a man and he come clear of the killin' all right enough, but seems like he ain't never got over it; and the sayin' in this town is that he's studied it out that ef ever he gets in the dark, either by himself or in company, he'll see the face of that there man he killed. So that's why, son, you've been seein' them lights a-blazin'. I've been seein' 'em myself fur goin' on twenty year or more, I reckin 'tis by now, and I've got used to 'em. But I ain't never got over wonderin' whut kind of thoughts he must have over there all alone by himself at night with everything lit up bright as day around him, when by rights things should be dark. But I ain't ever asted him, and whut's more, I never will. He ain't the kind you could go to him astin' him personal questions about his own private affairs. We-all here in town just accept him fur whut he is and sort of let him be. He's whut you might call a town character. His name is Mr. Dudley Stackpole."

In all respects save one, Squire Jonas, telling the inquiring stranger the tale, had the rights of it....