Studies of Lowell (from Literary Friends and Acquaintance) 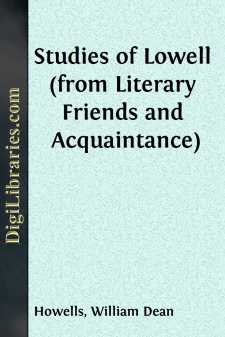 I have already spoken of my earliest meetings with Lowell at Cambridge when I came to New England on a literary pilgrimage from the West in 1860. I saw him more and more after I went to live in Cambridge in 1866; and I now wish to record what I knew of him during the years that passed between this date and that of his death. If the portrait I shall try to paint does not seem a faithful likeness to others who knew him, I shall only claim that so he looked to me, at this moment and at that. If I do not keep myself quite out of the picture, what painter ever did?

It was in the summer of 1865 that I came home from my consular post at Venice; and two weeks after I landed in Boston, I went out to see Lowell at Elmwood, and give him an inkstand that I had brought him from Italy. The bronze lobster whose back opened and disclosed an inkpot and a sand-box was quite ugly; but I thought it beautiful then, and if Lowell thought otherwise he never did anything to let me know it. He put the thing in the middle of his writing-table (he nearly always wrote on a pasteboard pad resting upon his knees), and there it remained as long as I knew the place—a matter of twenty-five years; but in all that time I suppose the inkpot continued as dry as the sand-box.

My visit was in the heat of August, which is as fervid in Cambridge as it can well be anywhere, and I still have a sense of his study windows lifted to the summer night, and the crickets and grasshoppers crying in at them from the lawns and the gardens outside. Other people went away from Cambridge in the summer to the sea and to the mountains, but Lowell always stayed at Elmwood, in an impassioned love for his home and for his town. I must have found him there in the afternoon, and he must have made me sup with him (dinner was at two o'clock) and then go with him for a long night of talk in his study. He liked to have some one help him idle the time away, and keep him as long as possible from his work; and no doubt I was impersonally serving his turn in this way, aside from any pleasure he might have had in my company as some one he had always been kind to, and as a fresh arrival from the Italy dear to us both.

He lighted his pipe, and from the depths of his easychair, invited my shy youth to all the ease it was capable of in his presence. It was not much; I loved him, and he gave me reason to think that he was fond of me, but in Lowell I was always conscious of an older and closer and stricter civilization than my own, an unbroken tradition, a more authoritative status. His democracy was more of the head and mine more of the heart, and his denied the equality which mine affirmed. But his nature was so noble and his reason so tolerant that whenever in our long acquaintance I found it well to come to open rebellion, as I more than once did, he admitted my right of insurrection, and never resented the outbreak. I disliked to differ with him, and perhaps he subtly felt this so much that he would not dislike me for doing it. He even suffered being taxed with inconsistency, and where he saw that he had not been quite just, he would take punishment for his error, with a contrition that was sometimes humorous and always touching.

Just then it was the dark hour before the dawn with Italy, and he was interested but not much encouraged by what I could tell him of the feeling in Venice against the Austrians. He seemed to reserve a like scepticism concerning the fine things I was hoping for the Italians in literature, and he confessed an interest in the facts treated which in the retrospect, I am aware, was more tolerant than participant of my enthusiasm....