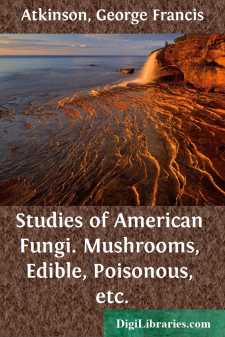 Since the issue of my "Studies and Illustrations of Mushrooms," as Bulletins 138 and 168 of the Cornell University Agricultural Experiment Station, there have been so many inquiries for them and for literature dealing with a larger number of species, it seemed desirable to publish in book form a selection from the number of illustrations of these plants which I have accumulated during the past six or seven years. The selection has been made of those species representing the more important genera, and also for the purpose of illustrating, as far as possible, all the genera of agarics found in the United States. This has been accomplished except in a few cases of the more unimportant ones. There have been added, also, illustrative genera and species of all the other orders of the higher fungi, in which are included many of the edible forms.

The photographs have been made with great care after considerable experience in determining the best means for reproducing individual, specific, and generic characters, so important and difficult to preserve in these plants, and so impossible in many cases to accurately portray by former methods of illustration.

Some apply the term mushroom to a single species, the one in cultivation, and which grows also in fields (Agaricus campestris), and call all others toadstools. It is becoming customary with some students to apply the term mushroom to the entire group of higher fungi to which the mushroom belongs (Basidiomycetes), and toadstool is regarded as a synonymous term, since there is, strictly speaking, no distinction between a mushroom and a toadstool. There are, then, edible and poisonous mushrooms, or edible and poisonous toadstools, as one chooses to employ the word.

A more pertinent question to ask is how to distinguish the edible from the poisonous mushrooms. There is no single test or criterion, like the "silver spoon" test, or the criterion of a scaly cap, or the presence of a "poison cup" or "death cup," which will serve in all cases to distinguish the edible from the poisonous. Two plants may possess identical characters in this respect, i. e., each may have the "death cup," and one is edible while the other is poisonous, as in Amanita cæsarea, edible, and A. phalloides, poisonous. There are additional characters, however, in these two plants which show that the two differ, and we recognize them as two different species.

To know several different kinds of edible mushrooms, which occur in greater or less quantity through the different seasons, would enable those interested in these plants to provide a palatable food at the expense only of the time required to collect them....