Studies in the Psychology of Sex, Volume 6 Sex in Relation to Society 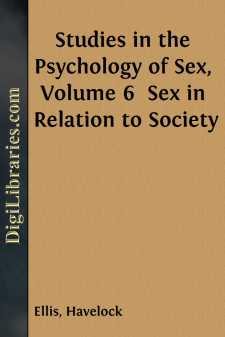 Add to My Favorites
Published: 9 years ago
Downloads: 131
Rating: (0 Votes)

CHAPTER I. THE MOTHER AND HER CHILD.

The Child's Right to Choose Its Ancestry—How This is Effected—The Mother the Child's Supreme Parent—Motherhood and the Woman Movement—The Immense Importance of Motherhood—Infant Mortality and Its Causes—The Chief Cause in the Mother—The Need of Rest During Pregnancy—Frequency of Premature Birth—The Function of the State—Recent Advance in Puericulture—The Question of Coitus During Pregnancy—The Need of Rest During Lactation—The Mother's Duty to Suckle Her Child—The Economic Question—The Duty of the State—Recent Progress in the Protection of the Mother—The Fallacy of State Nurseries.

A man's sexual nature, like all else that is most essential in him, is rooted in a soil that was formed very long before his birth. In this, as in every other respect, he draws the elements of his life from his ancestors, however new the recombination may be and however greatly it may be modified by subsequent conditions. A man's destiny stands not in the future but in the past. That, rightly considered, is the most vital of all vital facts. Every child thus has a right to choose his own ancestors. Naturally he can only do this vicariously, through his parents. It is the most serious and sacred duty of the future father to choose one half of the ancestral and hereditary character of his future child; it is the most serious and sacred duty of the future mother to make a similar choice. In choosing each other they have between them chosen the whole ancestry of their child. They have determined the stars that will rule his fate.

In the past that fateful determination has usually been made helplessly, ignorantly, almost unconsciously. It has either been guided by an instinct which, on the whole, has worked out fairly well, or controlled by economic interests of the results of which so much cannot be said, or left to the risks of lower than bestial chances which can produce nothing but evil. In the future we cannot but have faith—for all the hope of humanity must rest on that faith—that a new guiding impulse, reinforcing natural instinct and becoming in time an inseparable accompaniment of it, will lead civilized man on his racial course. Just as in the past the race has, on the whole, been moulded by a natural, and in part sexual, selection, that was unconscious of itself and ignorant of the ends it made towards, so in the future the race will be moulded by deliberate selection, the creative energy of Nature becoming self-conscious in the civilized brain of man. This is not a faith which has its source in a vague hope. The problems of the individual life are linked on to the fate of the racial life, and again and again we shall find as we ponder the individual questions we are here concerned with, that at all points they ultimately converge towards this same racial end.

Since we have here, therefore, to follow out the sexual relationships of the individual as they bear on society, it will be convenient at this point to put aside the questions of ancestry and to accept the individual as, with hereditary constitution already determined, he lies in his mother's womb.

It is the mother who is the child's supreme parent. At various points in zoölogical evolution it has seemed possible that the functions that we now know as those of maternity would be largely and even equally shared by the male parent. Nature has tried various experiments in this direction, among the fishes, for instance, and even among birds. But reasonable and excellent as these experiments were, and though they were sufficiently sound to secure their perpetuation unto this day, it remains true that it was not along these lines that Man was destined to emerge. Among all the mammal predecessors of Man, the male is an imposing and important figure in the early days of courtship, but after conception has once been secured the mother plays the chief part in the racial life. The male must be content to forage abroad and stand on guard when at home in the ante-chamber of the family. When she has once been impregnated the female animal angrily rejects the caresses she had welcomed so coquettishly before, and even in Man the place of the father at the birth of his child is not a notably dignified or comfortable one. Nature accords the male but a secondary and comparatively humble place in the home, the breeding-place of the race; he may compensate himself if he will, by seeking adventure and renown in the world outside....