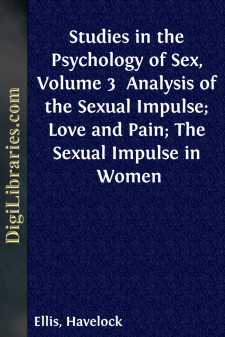 ANALYSIS OF THE SEXUAL IMPULSE.

The term "sexual instinct" may be said to cover the whole of the neuropsychic phenomena of reproduction which man shares with the lower animals. It is true that much discussion has taken place concerning the proper use of the term "instinct," and some definitions of instinctive action would appear to exclude the essential mechanism of the process whereby sexual reproduction is assured. Such definitions scarcely seem legitimate, and are certainly unfortunate. Herbert Spencer's definition of instinct as "compound reflex action" is sufficiently clear and definite for ordinary use.

A fairly satisfactory definition of instinct is that supplied by Dr. and Mrs. Peckham in the course of their study On the Instincts and Habits of Solitary Wasps. "Under the term 'instinct,'" they say, "we place all complex acts which are performed previous to experience and in a similar manner by all members of the same sex and race, leaving out as non-essential, at this time, the question of whether they are or are not accompanied by consciousness." This definition is quoted with approval by Lloyd Morgan, who modifies and further elaborates it (Animal Behavior, 1900, p. 21). "The distinction between instinctive and reflex behavior," he remarks, "turns in large degree on their relative complexity," and instinctive behavior, he concludes, may be said to comprise "those complex groups of co-ordinated acts which are, on their first occurrence, independent of experience; which tend to the well-being of the individual and the preservation of the race; which are due to the co-operation of external and internal stimuli; which are similarly performed by all the members of the same more or less restricted group of animals; but which are subject to variation, and to subsequent modification under the guidance of experience." Such a definition clearly justifies us in speaking of a "sexual instinct." It may be added that the various questions involved in the definition of the sexual instinct have been fully discussed by Moll in the early sections of his Untersuchungen über die Libido Sexualis....