Studies in the Psychology of Sex, Volume 2 Sexual Inversion 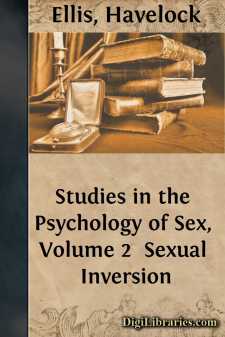 Sexual inversion, as here understood, means sexual instinct turned by inborn constitutional abnormality toward persons of the same sex. It is thus a narrower term than homosexuality, which includes all sexual attractions between persons of the same sex, even when seemingly due to the accidental absence of the natural objects of sexual attraction, a phenomenon of wide occurrence among all human races and among most of the higher animals. It is only during recent years that sexual inversion has been recognized; previously it was not distinguished from homosexuality in general, and homosexuality was regarded as a national custom, as an individual vice, or as an unimportant episode in grave forms of insanity. We have further to distinguish sexual inversion and all other forms of homosexuality from another kind of inversion which usually remains, so far as the sexual impulse itself is concerned, heterosexual, that is to say, normal. Inversion of this kind leads a person to feel like a person of the opposite sex, and to adopt, so far as possible, the tastes, habits, and dress of the opposite sex, while the direction of the sexual impulse remains normal. This condition I term sexo-esthetic inversion, or Eonism.

The nomenclature of the highly important form of sexual perversion with which we are here concerned is extremely varied, and most investigators have been much puzzled in coming to a conclusion as to the best, most exact, and at the same time most colorless names to apply to it.

The first in the field in modern times was Ulrichs who, as early as 1862, used the appellation "Uranian" (Uranier), based on the well-known myth in Plato's Banquet. Later he Germanized this term into "Urning" for the male, and "Urningin" for the female, and referred to the condition itself as "Urningtum." He also invented a number of other related terms on the same basis; some of these terms have had a considerable vogue, but they are too fanciful and high-strung to secure general acceptance. If used in other languages than German they certainly should not be used in their Germanized shape, and it is scarcely legitimate to use the term "Urning" in English. "Uranian" is more correct.

In Germany the first term accepted by recognized scientific authorities was "contrary sexual feeling" (Konträre Sexualempfindung). It was devised by Westphal in 1869, and used by Krafft-Ebing and Moll. Though thus accepted by the earliest authorities in this field, and to be regarded as a fairly harmless and vaguely descriptive term, it is somewhat awkward, and is now little used in Germany; it was never currently used outside Germany....