Studies in the Psychology of Sex, Volume 1 The Evolution of Modesty; The Phenomena of Sexual Periodicity; Auto-Erotism 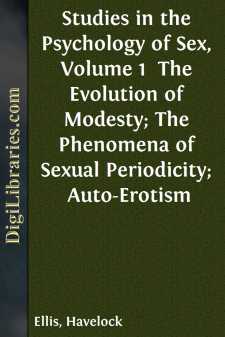 The Definition of Modesty—The Significance of Modesty—Difficulties in the Way of Its Analysis—The Varying Phenomena of Modesty Among Different Peoples and in Different Ages.

Modesty, which may be provisionally defined as an almost instinctive fear prompting to concealment and usually centering around the sexual processes, while common to both sexes is more peculiarly feminine, so that it may almost be regarded as the chief secondary sexual character of women on the psychical side. The woman who is lacking in this kind of fear is lacking, also, in sexual attractiveness to the normal and average man. The apparent exceptions seem to prove the rule, for it will generally be found that the women who are, not immodest (for immodesty is more closely related to modesty than mere negative absence of the sense of modesty), but without that fear which implies the presence of a complex emotional feminine organization to defend, only make a strong sexual appeal to men who are themselves lacking in the complementary masculine qualities. As a psychical secondary sexual character of the first rank, it is necessary, before any psychology of sex can be arranged in order, to obtain a clear view of modesty.

The immense importance of feminine modesty in creating masculine passion must be fairly obvious. I may, however, quote the observations of two writers who have shown evidence of insight and knowledge regarding this matter.

Casanova describes how, when at Berne, he went to the baths, and was, according to custom, attended by a young girl, whom he selected from a group of bath attendants. She undressed him, proceeded to undress herself, and then entered the bath with him, and rubbed him thoroughly all over, the operation being performed in the most serious manner and without a word being spoken. When all was over, however, he perceived that the girl had expected him to make advances, and he proceeds to describe and discuss his own feelings of indifference under such circumstances. "Though without gazing on the girl's figure, I had seen enough to recognize that she had all that a man can desire to find in a woman: a beautiful face, lively and well-formed eyes, a beautiful mouth, with good teeth, a healthy complexion, well-developed breasts, and everything in harmony. It is true that I had felt that her hands could have been smoother, but I could only attribute this to hard work; moreover, my Swiss girl was only eighteen, and yet I remained entirely cold. What was the cause of this? That was the question that I asked myself."

"It is clear," wrote Stendhal, "that three parts of modesty are taught. This is, perhaps, the only law born of civilization which produces nothing but happiness. It has been observed that birds of prey hide themselves to drink, because, being obliged to plunge their heads in the water, they are at that moment defenceless. After having considered what passes at Otaheite, I can see no other natural foundation for modesty. Love is the miracle of civilization....