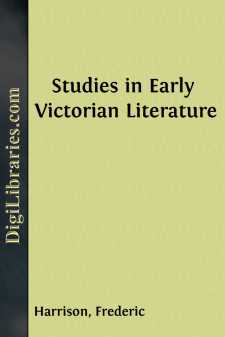 That which in England is conveniently described as the Victorian Age of literature has a character of its own, at once brilliant, diverse, and complex. It is an age peculiarly difficult to label in a phrase; but its copious and versatile gifts will make it memorable in the history of modern civilisation. The Victorian Age, it is true, has no Shakespeare or Milton, no Bacon or Hume, no Fielding or Scott—no supreme master in poetry, philosophy, or romance, whose work is incorporated with the thought of the world, who is destined to form epochs and to endure for centuries. Its genius is more scientific than literary, more historical than dramatic, greater in discovery than in abstract thought.

In lyric poetry and in romance our age has names second only to the greatest; its researches into nature and history are at least equal to those of any previous epoch; and, if it has not many great philosophers, it has developed the latest, most arduous, most important of all the sciences. This is the age of Sociology: its central achievement has been the revelation of social laws. This social aspect of thought colours the poetry, the romance, the literature, the art, and the philosophy of the Victorian Age. Literature has been the gainer thereby in originality and in force. It has been the loser in symmetry, in dignity, in grace.

The Victorian Age is a convenient term in English literature to describe the period from 1837 to 1895: not that we assign any sacramental efficacy to a reign, or assume that the Queen has given any special impulse to the writers of her time. Neither reigns, nor years, nor centuries, nor any arbitrary measure of time in the gradual evolution of thought can be exactly applied, or have any formative influence. A period of so many years, having some well-known name by which it can be labelled, is a mere artifice of classification. And of course an Englishman will not venture to include in his survey the American writers, or to bring them within his national era. The date, 1837, is an arbitrary point, and a purely English point. Yet it is curious how different a colour may be seen in the main current of the English literature produced before and after that year. In the year of the Queen's accession to the throne, the great writers of the early part of this century were either dead or silent. Scott, Byron, Shelley, Keats, Coleridge, Lamb, Sheridan, Hazlitt, Mackintosh, Crabbe, and Cobbett, were gone. There were still living in 1837, Wordsworth, Southey, Campbell, Moore, Jeffrey, Sydney Smith, De Quincey, Miss Edgeworth, Miss Mitford, Leigh Hunt, Brougham, Samuel Rogers:—living, it is true, but they had all produced their important work at some earlier date. Carlyle, Dickens, Thackeray, Macaulay, Tennyson, Browning, had begun to write, but were not generally known. The principal English authors who belong equally to the Georgian and to the Victorian Age are Landor, Bulwer, Disraeli, Hallam, and Milman, and they are not quite in the very first rank in either age....