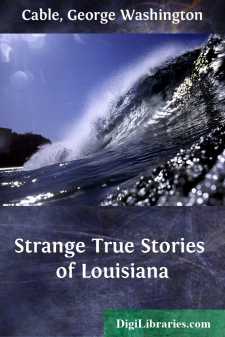 True stories are not often good art. The relations and experiences of real men and women rarely fall in such symmetrical order as to make an artistic whole. Until they have had such treatment as we give stone in the quarry or gems in the rough they seldom group themselves with that harmony of values and brilliant unity of interest that result when art comes in—not so much to transcend nature as to make nature transcend herself.

Yet I have learned to believe that good stories happen oftener than once I thought they did. Within the last few years there have dropped into my hands by one accident or another a number of these natural crystals, whose charms, never the same in any two, are in each and all enough at least to warn off all tampering of the fictionist. Happily, moreover, without being necessary one to another, they yet have a coherent sequence, and follow one another like the days of a week. They are mine only by right of discovery. From various necessities of the case I am sometimes the story-teller, and sometimes, in the reader's interest, have to abridge; but I add no fact and trim naught of value away. Here are no unconfessed "restorations," not one. In time, place, circumstance, in every essential feature, I give them as I got them—strange stories that truly happened, all partly, some wholly, in Louisiana.

In the spring of 1883, being one night the guest of my friend Dr. Francis Bacon, in New Haven, Connecticut, and the conversation turning, at the close of the evening, upon wonderful and romantic true happenings, he said:

"You are from New Orleans; did you never hear of Salome Müller?"

Thereupon he told the story, and a few weeks later sent me by mail, to my home in New Orleans, whither I had returned, a transcription, which he had most generously made, of a brief summary of the case—it would be right to say tragedy instead of case—as printed in "The Law Reporter" some forty years ago. That transcription lies before me now, beginning, "The Supreme Court of the State of Louisiana has lately been called upon to investigate and decide one of the most interesting cases which has ever come under the cognizance of a judicial tribunal." This episode, which had been the cause of public excitement within the memory of men still living on the scene, I, a native resident of New Orleans and student of its history, stumbled upon for the first time nearly two thousand miles from home.

I mentioned it to a number of lawyers of New Orleans, one after another. None remembered ever having heard of it. I appealed to a former chief-justice of the State, who had a lively personal remembrance of every member of the bench and the bar concerned in the case; but of the case he had no recollection. One of the medical experts called in by the court for evidence upon which the whole merits of the case seemed to hang was still living—the distinguished Creole physician, Dr. Armand Mercier. He could not recall the matter until I recounted the story, and then only in the vaguest way....