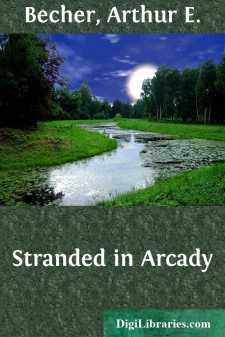 THE MIDDLE OF NOWHERE

At the half-conscious moment of awakening Prime had a confused impression that he must have gone to bed leaving the electric lights turned on full-blast. Succeeding impressions were even more disconcerting. It seemed that he had also gone to bed with his clothes on; that the bed was unaccountably hard; that the pillow had borrowed the characteristics of a pillory.

Sitting up to give these chaotic conclusions a chance to clarify themselves, he was still more bewildered. That which had figured as the blaze of the neglected electrics resolved itself into the morning sun reflecting dazzlement from the dimpled surface of a woodland lake. The hard bed proved to be a sandy beach; the pillory pillow a gnarled and twisted tree root which had given him a crick in his neck.

When he put his hand to the cramped neck muscle and moved to escape the bedazzling sun reflection, the changed point of view gave him a shock. Sitting with her back to a tree at a little distance was a strange young woman—strange in the sense that he was sure he had never seen her before. Like himself, she had evidently just awakened, and she was staring at him out of wide-open, slate-gray eyes. In the eyes he saw a vast bewilderment comparable to his own, something of alarm, and a trace of subconscious embarrassment as she put her hands to her hair, which was sadly tumbled.

Prime scrambled to his feet and said, "Good morning"—merely because the conventions, in whatever surroundings, die hard. At this the young woman got up, too, patting and pinning the rebellious hair into subjection.

"Good morning," she returned, quite calmly; and then: "If you—if you live here, perhaps you will be good enough to tell me where I am."

Prime checked a smile. "You beat me to it," he countered affably. "I was about to ask you if you could tell me where I am."

"Don't you know where you are?" she demanded.

"Only relatively; this charming sylvan environment is doubtless somewhere in America, but, as to the precise spot, I assure you I have no more idea than the man in the moon."

"It's a dream—it must be!" the young woman protested gropingly. "Last night I was in a city—in Quebec."

"So was I," was the prompt rejoinder. Then he felt for his watch, saying: "Wait a moment, let's see if it really was last night."

She waited; and then—"Was it?" she inquired eagerly.

"Yes, it must have been; my watch is still running."

She put her hand to her head. "I can't seem to think very clearly. If we were in Quebec last night, we can't be so very far from Quebec this morning. Can't you—don't you recognize this place at all?"

Prime took his first comprehensive survey of the surroundings. So far as could be seen there was nothing but the lake, with its farther shore dimly visible, and the primeval forest of pine, spruce, fir, and ghostly birch—a forest all-enveloping, shadowy, and rather forbidding, even with the summer morning sunlight playing upon it.

"It looks as if we might be a long way from Quebec," he ventured....