Stories of W.W. Jacobs An Index to all Volumes and Stories 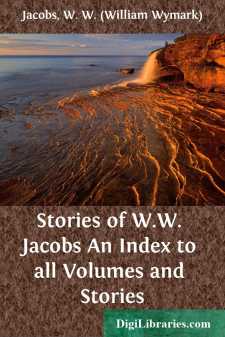 The ancient port of Sunwich was basking in the sunshine of a July afternoon. A rattle of cranes and winches sounded from the shipping in the harbour, but the town itself was half asleep. Somnolent shopkeepers in dim back parlours coyly veiled their faces in red handkerchiefs from the too ardent flies, while small boys left in charge noticed listlessly the slow passing of time as recorded by the church clock.

It is a fine church, and Sunwich is proud of it. The tall grey tower is a landmark at sea, but from the narrow streets of the little town itself it has a disquieting appearance of rising suddenly above the roofs huddled beneath it for the purpose of displaying a black-faced clock with gilt numerals whose mellow chimes have recorded the passing hours for many generations of Sunwich men.

Regardless of the heat, which indeed was mild compared with that which raged in his own bosom, Captain Nugent, fresh from the inquiry of the collision of his ship Conqueror with the German barque Hans Muller, strode rapidly up the High Street in the direction of home. An honest seafaring smell, compounded of tar, rope, and fish, known to the educated of Sunwich as ozone, set his thoughts upon the sea. He longed to be aboard ship again, with the Court of Inquiry to form part of his crew. In all his fifty years of life he had never met such a collection of fools. His hard blue eyes blazed as he thought of them, and the mouth hidden by his well-kept beard was set with anger.

Mr. Samson Wilks, his steward, who had been with him to London to give evidence, had had a time upon which he looked back in later years with much satisfaction at his powers of endurance. He was with the captain, and yet not with him. When they got out of the train at Sunwich he hesitated as to whether he should follow the captain or leave him. His excuse for following was the bag, his reason for leaving the volcanic condition of its owner's temper, coupled with the fact that he appeared to be sublimely ignorant that the most devoted steward in the world was tagging faithfully along a yard or two in the rear.

The few passers-by glanced at the couple with interest. Mr. Wilks had what is called an expressive face, and he had worked his sandy eyebrows, his weak blue eyes, and large, tremulous mouth into such an expression of surprise at the finding of the Court, that he had all the appearance of a beholder of visions. He changed the bag to his other hand as they left the town behind them, and regarded with gratitude the approaching end of his labours.

At the garden-gate of a fair-sized house some half-mile along the road the captain stopped, and after an impatient fumbling at the latch strode up the path, followed by Mr. Wilks, and knocked at the door. As he paused on the step he half turned, and for the first time noticed the facial expression of his faithful follower.

"What the dickens are you looking like that for?" he demanded.

Wrath blazed again in the captain's eyes and set lines in his forehead....