Stories of American Life and Adventure 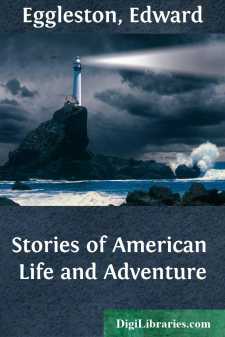 A WHITE BOY AMONG THE INDIANS.

Among the people that came to Virginia in 1609, two years after the colony was planted, was a boy named Henry Spelman. He was the son of a well-known man. He had been a bad and troublesome boy in England, and his family sent him to Virginia, thinking that he might be better in the new country. At least his friends thought he would not trouble them so much when he was so far away.

In order not to have so many to feed, he sent some of them to live among the Indians here and there. A chief called Little Powhatan asked Smith to send some of his men to live with him. The Indians wanted to get the white men to live among them, so as to learn to make the things that the white men had. Captain Smith agreed to give the boy Henry Spelman to Little Powhatan, if the chief would give him a place to plant a new settlement.

Spelman staid awhile with the chief, and then he went back to the English at Jamestown.

But when he came to Jamestown he was sorry that he had not staid among the Indians. Captain John Smith had gone home to England. George Percy was now governor of the English. They had very little food to eat, and Spelman began to be afraid that he might starve to death with the rest of them. Powhatan—not Little Powhatan, but the great Powhatan, who was chief over all the other chiefs in the neighborhood—sent a white man who was living with him to carry some deer meat to Jamestown. When it came time for this white man to go back, he asked that some of his countrymen might go to the Indian country with him. The governor sent Spelman, who was glad enough to go to the Indians again, because they had plenty of food to eat.

Three weeks after this, Powhatan sent Henry Spelman back to Jamestown to say to the English, that if they would come to his country, and bring him some copper, he would give them some corn for it. The Indians at this time had no iron, and what little copper they had they bought from other Indians, who probably got it from the copper mines far away on Lake Superior.

The English greatly needed corn, so they took a boat and went up to the Indian country with copper, in order to buy corn. They quarreled with the Indians about the measurement of the corn. The Indians hid themselves near the water, and, while the white men were carrying the corn on their vessel, the Indians killed some of them. About this time, seeing that the white men were so hungry, the Indians began to hope that they would be able to drive them all out of the country.

Powhatan saved Spelman from being killed by the Indians; but, now that the Indians were at war with the white men, who were shut up in Jamestown without food, they wished to kill all the white people in the country.

Spelman and a Dutchman, who also lived with Powhatan, began to be afraid that he would not protect them any longer....