Stories of Achievement, Volume IV (of 6) Authors and Journalists 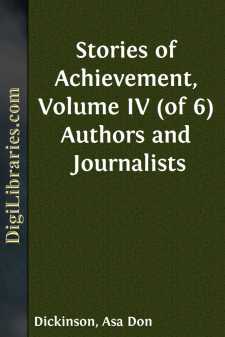 From the "Confessions of Rousseau."

It is strange to hear that those critics who spoke of Rousseau's "incomparable gift of expression," of his "easy, natural style," were ludicrously incorrect in their allusions. From his "Confessions" we learn that he had no gift of clear, fluent expression; that he was by nature so incoherent that he could not creditably carry on an ordinary conversation; and that the ideas which stirred Europe, although spontaneously conceived, were brought forth and set before the world only after their progenitor had suffered the real pangs of labor.

But after all it is the same old story over again. Great things are rarely said or done easily.

Two things very opposite unite in me, and in a manner which I cannot myself conceive. My disposition is extremely ardent, my passions lively and impetuous, yet my ideas are produced slowly, with great embarrassment and after much afterthought. It might be said my heart and understanding do not belong to the same individual. A sentiment takes possession of my soul with the rapidity of lightning, but instead of illuminating, it dazzles and confounds me; I feel all, but see nothing; I am warm but stupid; to think I must be cool. What is astonishing, my conception is clear and penetrating, if not hurried: I can make excellent impromptus at leisure, but on the instant could never say or do anything worth notice. I could hold a tolerable conversation by the post, as they say the Spaniards play at chess, and when I read that anecdote of a duke of Savoy, who turned himself round, while on a journey, to cry out "a votre gorge, marchand de Paris!" I said, "Here is a trait of my character!"

This slowness of thought, joined to vivacity of feeling, I am not only sensible of in conversation, but even alone. When I write, my ideas are arranged with the utmost difficulty. They glance on my imagination and ferment till they discompose, heat, and bring on a palpitation; during this state of agitation I see nothing properly, cannot write a single word, and must wait till all is over. Insensibly the agitation subsides, the chaos acquires form, and each circumstance takes its proper place. Have you never seen an opera in Italy where during the change of scene everything is in confusion, the decorations are intermingled, and any one would suppose that all would be overthrown; yet by little and little, everything is arranged, nothing appears wanting, and we feel surprised to see the tumult succeeded by the most delightful spectacle. This is a resemblance of what passes in my brain when I attempt to write; had I always waited till that confusion was past, and then pointed, in their natural beauties, the objects that had presented themselves, few authors would have surpassed me.

Thence arises the extreme difficulty I find in writing; my manuscripts, blotted, scratched, and scarcely legible, attest the trouble they cost me; nor is there one of them but I have been obliged to transcribe four or five times before it went to press....