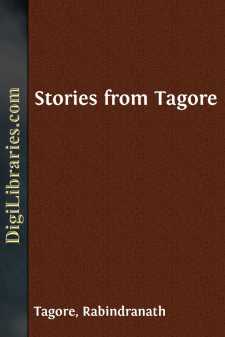 My five years' old daughter Mini cannot live without chattering. I really believe that in all her life she has not wasted a minute in silence. Her mother is often vexed at this, and would stop her prattle, but I would not. To see Mini quiet is unnatural, and I cannot bear it long. And so my own talk with her is always lively.

One morning, for instance, when I was in the midst of the seventeenth chapter of my new novel, my little Mini stole into the room, and putting her hand into mine, said: "Father! Ramdayal the door-keeper calls a crow a krow! He doesn't know anything, does he?"

Before I could explain to her the differences of language in this world, she was embarked on the full tide of another subject. "What do you think, Father? Bhola says there is an elephant in the clouds, blowing water out of his trunk, and that is why it rains!"

And then, darting off anew, while I sat still making ready some reply to this last saying: "Father! what relation is Mother to you?"

With a grave face I contrived to say: "Go and play with Bhola, Mini! I am busy!"

The window of my room overlooks the road. The child had seated herself at my feet near my table, and was playing softly, drumming on her knees. I was hard at work on my seventeenth chapter, where Pratap Singh, the hero, had just caught Kanchanlata, the heroine, in his arms, and was about to escape with her by the third-story window of the castle, when all of a sudden Mini left her play, and ran to the window, crying: "A Cabuliwallah! a Cabuliwallah!" Sure enough in the street below was a Cabuliwallah, passing slowly along. He wore the loose, soiled clothing of his people, with a tall turban; there was a bag on his back, and he carried boxes of grapes in his hand.

I cannot tell what were my daughter's feelings at the sight of this man, but she began to call him loudly. "Ah!" I thought, "he will come in, and my seventeenth chapter will never be finished!" At which exact moment the Cabuliwallah turned, and looked up at the child. When she saw this, overcome by terror, she fled to her mother's protection and disappeared. She had a blind belief that inside the bag, which the big man carried, there were perhaps two or three other children like herself. The pedlar meanwhile entered my doorway and greeted me with a smiling face.

So was the position of my hero and my heroine, that my first impulse was to stop and buy something, since the man had been called. I made some small purchases, and a conversation began about Abdurrahman, the Russians, the English, and the Frontier Policy.

As he was about to leave, he asked: "And where is the little girl, sir?"

And I, thinking that Mini must get rid of her false fear, had her brought out.

She stood by my chair, and looked at the Cabuliwallah and his bag. He offered her nuts and raisins, but she would not be tempted, and only clung the closer to me, with all her doubts increased.

This was their first meeting.

One morning, however, not many days later, as I was leaving the house, I was startled to find Mini, seated on a bench near the door, laughing and talking, with the great Cabuliwallah at her feet. In all her life, it appeared, my small daughter had never found so patient a listener, save her father. And already the corner of her little sari was stuffed with almonds and raisins, the gift of her visitor. "Why did you give her those?" I said, and taking out an eight-anna bit, I handed it to him. The man accepted the money without demur, and slipped it into his pocket.

Alas, on my return an hour later, I found the unfortunate coin had made twice its own worth of trouble! For the Cabuliwallah had given it to Mini; and her mother, catching sight of the bright round object, had pounced on the child with: "Where did you get that eight-anna bit?"

"The Cabuliwallah gave it me," said Mini cheerfully....