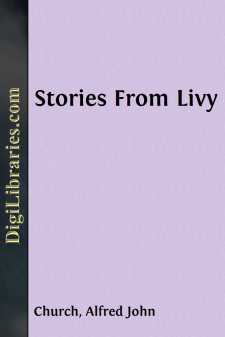 CHAPTER I. ~~ THE STORY OF ROMULUS AND OF NUMA.

Æneas of Troy, coming to the land of Italy, took to wife Lavinia, daughter of King Latinus, and built him a city, which he called Lavinium, after the name of his wife. And, after thirty years, his son Ascanius went forth from Lavinium with much people, and built him a new city, which he called Alba. In this city reigned kings of the house and lineage of Æneas for twelve generations. Of these kings the eleventh in descent was one Procas, who, having two sons, Numitor and Amulius, left his kingdom, according to the custom, to Numitor, the elder. But Amulius drave out his brother, and reigned in his stead. Nor was he content with this wickedness, but slew all the male children of his brother. And the daughter of his brother, that was named Rhea Silvia, he chose to be a priestess of Vesta, making as though he would do the maiden honour; but his thought was that the name of his brother should perish, for they that serve Vesta are vowed to perpetual virginity.

But it came to pass that Rhea bare twin sons, whose father, it was said, was the god Mars. Very wroth was Amulius when he heard this thing; Rhea he made fast in prison, and the children he gave to certain of his servants that they should cast them into the river. Now it chanced that at this season Tiber had overflowed his banks, neither could the servants come near to the stream of the river; nevertheless they did not doubt that the children would perish, for all that the overflowing of the water was neither deep nor of a swift current Thinking then that they had duly performed the commandment of the King, they set down the babes in the flood and departed. But after a while the flood abated, and left the basket wherein the children had been laid on dry ground. And a she-wolf, coming down from the hill to drink at the river (for the country in those days was desert and abounding in wild beasts), heard the crying of the children and ran to them. Nor did she devour them, but gave them suck; nay, so gentle was she that Faustulus, the King's shepherd, chancing to go by, saw that she licked them with her tongue.

This Faustulus took the children and gave them to his wife to rear; and these, when they were of age to go by themselves, were not willing to abide with the flocks and herds, but were hunters, wandering through the forests that were in those parts. And afterwards, being now come to full strength, they were not content to slay wild beasts only, but would assail troops of robbers, as these were returning laden with their booty, and would divide the spoils among the shepherds. Now there was held in those days, on the hill that is now called the Palatine, a yearly festival to the god Pan. This festival King Evander first ordained, having come from Arcadia, in which land, being a land of shepherds, Pan that is the god of shepherds is greatly honoured. And when the young men and their company (for they had gathered a great company of shepherds about them, and led them in all matters both of business and of sport) were busy with the festival, there came upon them certain robbers that had made an ambush in the place, being very wroth by reason of the booty which they had lost....