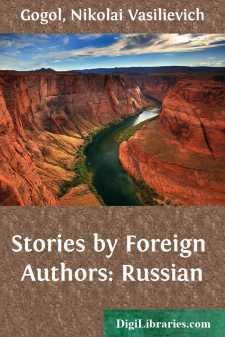 From "Torrents of Spring." Translated by Constance Garnett.

In one of the outlying streets of Moscow, in a gray house with white columns and a balcony, warped all askew, there was once living a lady, a widow, surrounded by a numerous household of serfs. Her sons were in the government service at Petersburg; her daughters were married; she went out very little, and in solitude lived through the last years of her miserly and dreary old age. Her day, a joyless and gloomy day, had long been over; but the evening of her life was blacker than night.

Of all her servants, the most remarkable personage was the porter, Gerasim, a man full twelve inches over the normal height, of heroic build, and deaf and dumb from his birth. The lady, his owner, had brought him up from the village where he lived alone in a little hut, apart from his brothers, and was reckoned about the most punctual of her peasants in the payment of the seignorial dues. Endowed with extraordinary strength, he did the work of four men; work flew apace under his hands, and it was a pleasant sight to see him when he was ploughing, while, with his huge palms pressing hard upon the plough, he seemed alone, unaided by his poor horse, to cleave the yielding bosom of the earth, or when, about St. Peter's Day, he plied his scythe with a furious energy that might have mown a young birch copse up by the roots, or swiftly and untiringly wielded a flail over two yards long; while the hard oblong muscles of his shoulders rose and fell like a lever. His perpetual silence lent a solemn dignity to his unwearying labor. He was a splendid peasant, and, except for his affliction, any girl would have been glad to marry him. . . But now they had taken Gerasim to Moscow, bought him boots, had him made a full-skirted coat for summer, a sheepskin for winter, put into his hand a broom and a spade, and appointed him porter.

At first he intensely disliked his new mode of life. From his childhood he had been used to field labor, to village life. Shut off by his affliction from the society of men, he had grown up, dumb and mighty, as a tree grows on a fruitful soil. When he was transported to the town, he could not understand what was being done with him; he was miserable and stupefied, with the stupefaction of some strong young bull, taken straight from the meadow, where the rich grass stood up to his belly, taken and put in the truck of a railway train, and there, while smoke and sparks and gusts of steam puff out upon the sturdy beast, he is whirled onwards, whirled along with loud roar and whistle, whither—God knows! What Gerasim had to do in his new duties seemed a mere trifle to him after his hard toil as a peasant; in half an hour all his work was done, and he would once more stand stock-still in the middle of the courtyard, staring open-mouthed at all the passers-by, as though trying to wrest from them the explanation of his perplexing position; or he would suddenly go off into some corner, and flinging a long way off the broom or the spade, throw himself on his face on the ground, and lie for hours together without stirring, like a caged beast....