"Stops", Or How to Punctuate A Practical Handbook for Writers and Students 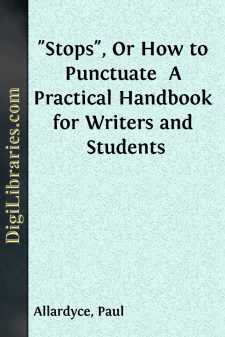 Add to My Favorites
Published: 8 years ago
Downloads: 70
Rating: (0 Votes)

The Use of Punctuation.—Punctuation is a device for marking out the arrangement of a writer's ideas. Reading is thereby made easier than it otherwise would be.

A writer's ideas are expressed by a number of words arranged in groups, the words in one group being more closely connected with one another than they are with those in the next group. An example will show this grouping in its simplest form:

He never convinces the reason, or fills the imagination, or touches the heart.

To understand what is written, the reader must group the words together in the way intended by the writer; and in doing this he can receive assistance in various ways. Partly by the inflection of the words; partly by their arrangement; partly also by punctuation. As to inflection, we see in Latin an adjective and a substantive standing together, yet differing in gender, in number, or in case; and we know that the adjective does not qualify the substantive. But English has not the numerous inflections of Latin. More scrupulous care therefore is needed in the arrangement of words in order to bring together in position such as are connected in meaning. Yet this is not always enough. Except in the very simplest sentences there are generally several arrangements which are grammatically possible; and, though all save one may be absurd in meaning, the reader may waver for a moment before the absurdity strikes him. Some artificial aid is thus needed to prevent him from thinking of any arrangement but the right one. There is no fault, for instance, to be found with the arrangement of the following words, yet, printed without points, they form a mere puzzle:

He had arrived already prepossessed with a strong feeling of the neglect which he had experienced from the Whigs his old friends however all of them appeared ravished to see him offered apologies for the mode in which they had treated him and caught at him as at a twig when they were drowning the influence of his talents they understood and were willing to see it thrown into the opposite scale.

Of course, with a little effort the meaning can be discovered; but if such a little effort had to be put forth in every page of a whole book, reading would become a serious task. By means of points, or "stops," we are spared much of this. The groups are presented ready-made to the eye; and the mind, bent on understanding the thought, is not distracted by having first to discover the connection of the words.

The reader's task is more difficult where two or more ways of grouping the words not only are grammatically possible, but lead each to a more or less intelligible meaning. As a rule he can find out from the context which way the writer meant him to take. One politician writes to another: "I ask you as the recognized leader of our party what you think of this measure;" and nobody accuses the writer of presumption. We might even pass over the following startling sentence without observing the reflection which it casts on a respectable body of men:

Hence he considered marriage with a modern political economist as dangerous.

And all the air a solemn stillness holds.

In longer and more involved sentences the risk of ambiguity is obviously much greater. Now by the judicious use of points ambiguous language can occasionally be made clear. "The mothers-of-young-children employed in factories" is no doubt a bold form, but it leaves us in no doubt as to the meaning....