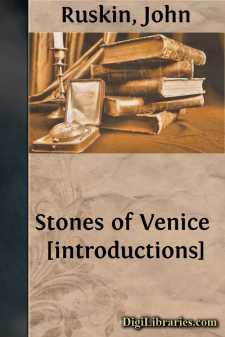 The exaltation, the sin, and the punishment of Tyre have been recorded for us, in perhaps the most touching words ever uttered by the Prophets of Israel against the cities of the stranger. But we read them as a lovely song; and close our ears to the sternness of their warning: for the very depth of the Fall of Tyre has blinded us to its reality, and we forget, as we watch the bleaching of the rocks between the sunshine and the sea, that they were once "as in Eden, the garden of God."

Her successor, like her in perfection of beauty, though less in endurance of dominion, is still left for our beholding in the final period of her decline: a ghost upon the sands of the sea, so weak—so quiet,—so bereft of all but her loveliness, that we might well doubt, as we watched her faint reflection in the mirage of the lagoon, which was the City, and which the Shadow.

I would endeavor to trace the lines of this image before it be for ever lost, and to record, as far as I may, the warning which seems to me to be uttered by every one of the fast-gaining waves, that beat, like passing bells, against the STONES OF VENICE.

SECTION II. It would be difficult to overrate the value of the lessons which might be derived from a faithful study of the history of this strange and mighty city: a history which, in spite of the labor of countless chroniclers, remains in vague and disputable outline,—barred with brightness and shade, like the far away edge of her own ocean, where the surf and the sand-bank are mingled with the sky. The inquiries in which we have to engage will hardly render this outline clearer, but their results will, in some degree, alter its aspect; and, so far as they bear upon it at all, they possess an interest of a far higher kind than that usually belonging to architectural investigations. I may, perhaps, in the outset, and in few words, enable the general reader to form a clearer idea of the importance of every existing expression of Venetian character through Venetian art, and of the breadth of interest which the true history of Venice embraces, than he is likely to have gleaned from the current fables of her mystery or magnificence. SECTION III. Venice is usually conceived as an oligarchy: She was so during a period less than the half of her existence, and that including the days of her decline; and it is one of the first questions needing severe examination, whether that decline was owing in any wise to the change in the form of her government, or altogether as assuredly in great part, to changes, in the character of the persons of whom it was composed.

The state of Venice existed Thirteen Hundred and Seventy-six years, from the first establishment of a consular government on the island of the Rialto, [Footnote: Appendix I., "Foundations of Venice."] to the moment when the General-in-chief of the French army of Italy pronounced the Venetian republic a thing of the past. Of this period, Two Hundred and Seventy-six years [Footnote: Appendix II., "Power of the Doges."] were passed in a nominal subjection to the cities of old Venetia, especially to Padua, and in an agitated form of democracy, of which the executive appears to have been entrusted to tribunes, [Footnote: Sismondi, Hist. des Rép. Ital., vol. i. ch. v.] chosen, one by the inhabitants of each of the principal islands. For six hundred years, [Footnote: Appendix III., "Serrar del Consiglio."] during which the power of Venice was continually on the increase, her government was an elective monarchy, her King or doge possessing, in early times at least, as much independent authority as any other European sovereign, but an authority gradually subjected to limitation, and shortened almost daily of its prerogatives, while it increased in a spectral and incapable magnificence....