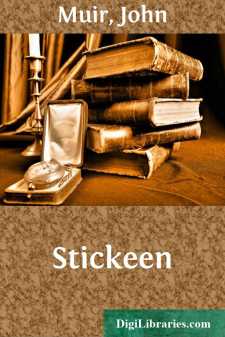 In the summer of 1880 I set out from Fort Wrangel in a canoe to continue the exploration of the icy region of southeastern Alaska, begun in the fall of 1879. After the necessary provisions, blankets, etc., had been collected and stowed away, and my Indian crew were in their places ready to start, while a crowd of their relatives and friends on the wharf were bidding them good-by and good-luck, my companion, the Rev. S.H. Young, for whom we were waiting, at last came aboard, followed by a little black dog, that immediately made himself at home by curling up in a hollow among the baggage. I like dogs, but this one seemed so small and worthless that I objected to his going, and asked the missionary why he was taking him.

"Such a little helpless creature will only be in the way," I said; "you had better pass him up to the Indian boys on the wharf, to be taken home to play with the children. This trip is not likely to be good for toy-dogs. The poor silly thing will be in rain and snow for weeks or months, and will require care like a baby."

But his master assured me that he would be no trouble at all; that he was a perfect wonder of a dog, could endure cold and hunger like a bear, swim like a seal, and was wondrous wise and cunning, etc., making out a list of virtues to show he might be the most interesting member of the party.

Nobody could hope to unravel the lines of his ancestry. In all the wonderfully mixed and varied dog-tribe I never saw any creature very much like him, though in some of his sly, soft, gliding motions and gestures he brought the fox to mind. He was short-legged and bunchy-bodied, and his hair, though smooth, was long and silky and slightly waved, so that when the wind was at his back it ruffled, making him look shaggy. At first sight his only noticeable feature was his fine tail, which was about as airy and shady as a squirrel's, and was carried curling forward almost to his nose. On closer inspection you might notice his thin sensitive ears, and sharp eyes with cunning tan-spots above them. Mr. Young told me that when the little fellow was a pup about the size of a woodrat he was presented to his wife by an Irish prospector at Sitka, and that on his arrival at Fort Wrangel he was adopted with enthusiasm by the Stickeen Indians as a sort of new good-luck totem, was named "Stickeen" for the tribe, and became a universal favorite; petted, protected, and admired wherever he went, and regarded as a mysterious fountain of wisdom.

On our trip he soon proved himself a queer character—odd, concealed, independent, keeping invincibly quiet, and doing many little puzzling things that piqued my curiosity. As we sailed week after week through the long intricate channels and inlets among the innumerable islands and mountains of the coast, he spent most of the dull days in sluggish ease, motionless, and apparently as unobserving as if in deep sleep. But I discovered that somehow he always knew what was going on. When the Indians were about to shoot at ducks or seals, or when anything along the shore was exciting our attention, he would rest his chin on the edge of the canoe and calmly look out like a dreamy-eyed tourist....