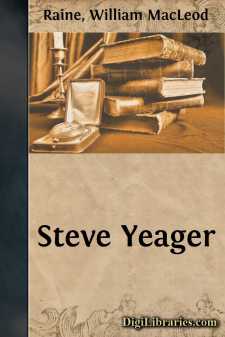 CHAPTER I STEVE MAKES A MISTAKE

Steve Yeager held his bronco to a Spanish trot. Somewhere in front of him, among the brown hill swells that rose and fell like waves of the sea, lay Los Robles and breakfast. One solitary silver dollar, too lonesome even to jingle, lay in his flatulent trouser pocket. After he and Four Bits had eaten, two quarters would take the place of the big cartwheel. Then would come dinner, a second transfer of capital, and his pocket would be empty as a cow's stomach after a long drive.

Being dead broke, according to the viewpoint of S. Yeager, is right and fitting after a jaunt to town when one has a good job back in the hills. But it happened he had no more job than a rabbit. Wherefore, to keep up his spirits he chanted the endless metrical version of the adventures of Sam Bass, who

"... started out to Texas a cowboy for to be,And a kinder-hearted fellow you scarcely ever'd see."

Steve had not quit his job. It had quit him. A few years earlier the Lone Star Cattle Company had reigned supreme in Dry Sandy Valley and the territory tributary thereto. Its riders had been kings of the range. That was before the tide of settlement had spilled into the valley, before nesters had driven in their prairie schooners, homesteaded the water-holes, and strung barb-wire fences across the range. Line-riders and dry farmers and irrigators had pushed the cowpuncher to one side. Sheep had come bleating across the desert to wage war upon the cattle. Finally Uncle Sam had sliced off most of the acreage still left and called it a forest reserve.

Wherefore the Lone Star outfit had thrown up its hands, sold its holdings, and moved to Los Angeles to live. Wherefore also Steve Yeager, who did not know Darwin from a carburetor, had by process of evolution been squeezed out of the occupation he had followed all of his twenty-three years since he could hang on to a saddle-horn. He had mournfully foreseen the end when the schoolhouse was built on Pine Knob and little folks went down the road with their arms twined around the waist of teacher. After grizzled Tim Sawyer made bowlegged tracks straight for that schoolmarm and matrimony, his friends realized that the joyous whoop of the puncher would not much longer be heard in the land. The range-rider must dwindle to a farmer or get off the earth. Steve was getting off the earth.

Since Steve was of the sunburnt State, still a boy, and by temperament incurably optimistic, he sang cheerfully. He wanted to forget that he had eaten neither supper nor breakfast. So he carried Mr. Bass through many adventures till that genial bandit

"... sold out at Custer City and there got on a spree,And a tougher lot of cowboys you never'd hope to see."

Four Bits had topped a rise and followed the road down in its winding descent. After the nomadic fashion of Arizona the trail circled around a tongue of a foothill which here jutted out. Voices from just beyond the bend startled Yeager. One of them was raised impatiently.