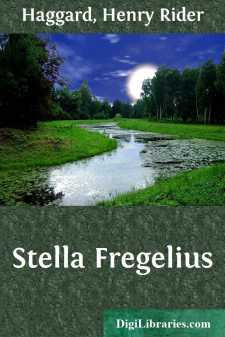 CHAPTER I MORRIS, MARY, AND THE AEROPHONE

Above, the sky seemed one vast arc of solemn blue, set here and there with points of tremulous fire; below, to the shadowy horizon, stretched the plain of the soft grey sea, while from the fragrances of night and earth floated a breath of sleep and flowers.

A man leaned on the low wall that bordered the cliff edge, and looked at sea beneath and sky above. Then he contemplated the horizon, and murmured some line heard or learnt in childhood, ending "where earth and heaven meet."

"But they only seem to meet," he reflected to himself, idly. "If I sailed to that spot they would be as wide apart as ever. Yes, the stars would be as silent and as far away, and the sea quite as restless and as salt. Yet there must be a place where they do meet. No, Morris, my friend, there is no such place in this world, material or moral; so stick to facts, and leave fancies alone."

But that night this speculative man felt in the mood for fancies, for presently he was staring at one of the constellations, and saying to himself, "Why not? Well, why not? Granted force can travel through ether,—whatever ether is—why should it stop travelling? Give it time enough, a few seconds, or a few minutes or a few years, and why should it not reach that star? Very likely it does, only there it wastes itself. What would be needed to make it serviceable? Simply this—that on the star there should dwell an Intelligence armed with one of my instruments, when I have perfected them, or the secret of them. Then who knows what might happen?" and he laughed a little to himself at the vagary.

From all of which wandering speculations it may be gathered that Morris Monk was that rather common yet problematical person, an inventor who dreamed dreams.

An inventor, in truth, he was, although as yet he had never really invented anything. Brought up as an electrical engineer, after a very brief experience of his profession he had fallen victim to an idea and become a physicist. This was his idea, or the main point of it—for its details do not in the least concern our history: that by means of a certain machine which he had conceived, but not as yet perfected, it would be possible to complete all existing systems of aerial communication, and enormously to simplify their action and enlarge their scope. His instruments, which were wireless telephones—aerophones he called them—were to be made in pairs, twins that should talk only to each other. They required no high poles, or balloons, or any other cumbrous and expensive appliance; indeed, their size was no larger than that of a rather thick despatch box. And he had triumphed; the thing was done—in all but one or two details.

For two long years he had struggled with these, and still they eluded him. Once he had succeeded—that was the dreadful thing. Once for a while the instruments had worked, and with a space of several miles between them. But—this was the maddening part of it—he had never been able to repeat the exact conditions; or, rather, to discover precisely what they were....