Steel Traps Describes the Various Makes and Tells How to Use Them, Also Chapters on Care of Pelts, Etc. 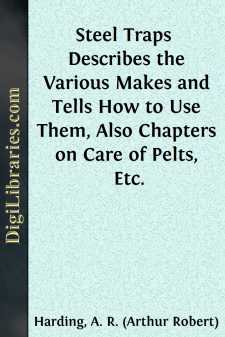 Mr. Sewell Newhouse, the inventor of the Newhouse Trap grew up surrounded by the Iroquois Indians of the Oneida Tribe; that tribe which alone of all the Red men cast in their lot with the Americans in our great struggle for liberty.

At an early age he learned the gunsmith's trade. In those days guns were all made by hand, and in small shops. Mr. Newhouse soon became very skillful both in making and shooting the rifle. At that time "Turkey Shoots" were very popular, and Mr. Newhouse was always sure of his bird at sixty to eighty rods. It was a puzzle to many of the old hands how he managed to shoot so accurately, even when the wind was blowing "half a gale" till it was finally discovered that he had fitted his rifle with an adjustable wind sight. This was one of his early inventions that has now come into common use in target shooting.

The Indians were very fond of shooting at a mark both with the rifle and the bow and arrow, but they would seldom try conclusions with "Sewell" — as they all called him — for he could always out shoot them with the rifle, and very few of the tribe were as skillful as he with the bow and arrow. In wrestling too, a favorite game of the day, Mr. Newhouse was more than a match for the best men of his time both white and red.

Some time before the year 1840, Mr. Newhouse undertook the manufacture of traps and so popular had his traps become that in 1842 they were well known to all the tribes of the state, so that about this year, when a large part of the Oneidas moved to Green Bay, Wisconsin Territory, an essential part of this outfit was a stock of Newhouse's traps. Thus their fame spread to the West.

It is related that a delegation of chiefs from one of the Algonquin tribes of the Great Lake region once called at Mr. Newhouse's Shop. They had used some traps from a rival manufacturer but were much disgusted with them for in the intense cold of their country the springs would break. "As breaks the pipe of peace in war time." They looked over his stock of Traps, pressed down the springs with their moccasined feet, grunted and shook their heads in disapproval. Then Sewell went out to the frozen creek nearby, the savages watching in silence. He chopped out a huge piece of ice, and bringing it to the shop broke it into pieces which he threw into a large tub of water, then setting half a dozen of the Traps he plunged them into the water, and in sight of the astonished and pleased Red Men he sprung them all off.

This severe test was enough for the visitors, and at his own price Mr. Newhouse sold them his entire stock of traps. The affair greatly pleased the neighboring Oneidas for well they knew when their "Sewell" made and tempered a trap spring by his secret and "magical" process it would stand up to its work under any and all circumstances.

Early in the fifties Mr. Newhouse removed from his home at The Oneida Castle up the Valley to a spot now known as Kenwood. Here close by the bank of the rushing Oneida he established himself in a little smithey and began to make his famous traps on a larger scale....