Speeches of His Majesty Kamehameha IV. To the Hawaiian Legislature

by King of the Hawaiian Islands Kamehameha IV 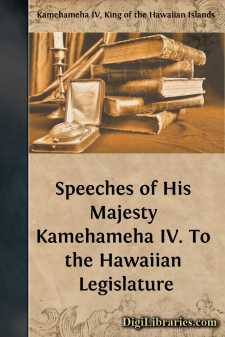 Whereas, It has come to my knowledge from the highest official sources, that my Government has been recently threatened with overthrow by lawless violence; and whereas the representatives at my Court, of the United States, Great Britain and France, being cognizant of these threats, have offered me the prompt assistance of the Naval forces of their respective countries, I hereby publicly proclaim my acceptance of the aid thus proffered in support of my Sovereignty. My independence is more firmly established than ever before.

Keoni Ana.Palace, 8th December, 1854.By the King and Kuhina Nui.

Public Proclamation of the Succession To the Throne of His Majesty Kamehameha IV.

Whereas, It has pleased Almighty God to remove from this world our beloved Sovereign, His late Majesty, Kamehameha III.; and whereas, by the will of His late Majesty, and by the appointment and Proclamation of His Majesty and of the House of Nobles, His Royal Highness, Prince Liholiho, was declared to be His Majesty's Successor. Therefore, Public Proclamation is hereby made, that Prince Alexander Liholiho is KING of the Hawaiian Islands, under the style of Kamehameha IV. God preserve the King.

His Majesty's Address to His Privy Council of State in reply to their Condolences over the Death of His late Majesty Kamehameha III.

Chiefs:—I have become by the Will of God, your Father, as I have been your Child. You must help me, for I stand in need of help.

To you Ministers, and other high officers of State of Our late King, I return my sincere thanks for the expressions of condolence with which you have this morning comforted me. I request of you to continue your labors, in the several positions you have hitherto held, until when my grief shall have allowed me time for reflection, I make such new arrangements as shall seem proper.

I thank the Members of this Council, in general for their condolence, who will, also, I hope, assist me with their advice, as though they had been appointed by myself.

His Majesty's Address on the occasion of taking the Oath prescribed by the Constitution. Extr. from Polynesian, Jan. 13, 1855.

I solemnly swear, in the presence of Almighty God, to maintain the Constitution of the Kingdom whole and inviolate, and to govern in conformity with that and the laws.

Immediately afterwards, His Highness the Kuhina Nui repeated the words "God preserve the King," which were re-echoed everywhere throughout the Church with loud cheers; His Majesty's Royal Standard and the National Ensign were hoisted and a royal salute fired from the fort.

Afterwards it pleased the King to make a solemn and eloquent address, in native, to His subjects, which was received by them with great enthusiasm, a translation of which is as follows:

In the providence of God, and by the will of his late Majesty Kamehameha III., this day read in your hearing, I have been called to the high and responsible position of the Chief Ruler of this nation....