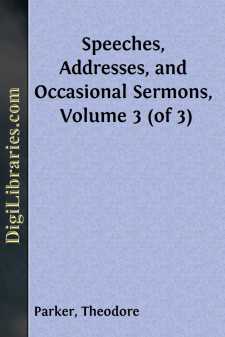 SPEECH AT A MEETING OF THE CITIZENS OF BOSTON, IN FANEUIL HALL, MARCH 25, 1850, TO CONSIDER THE SPEECH OF MR. WEBSTER.

Mr. President and Fellow Citizens: It is an important occasion which has brought us together. A great crisis has occurred in the affairs of the United States. There is a great question now before the people. In any European country west of Russia and east of Spain, it would produce a revolution, and be settled with gunpowder. It narrowly concerns the material welfare of the nation. The decision that is made will help millions of human beings into life, or will hinder and prevent millions from being born. It will help or hinder the advance of the nation in wealth for a long time to come. It is a question which involves the honor of the people. Your honor and my honor are concerned in this matter, which is presently to be passed upon by the people of the United States. More than all this, it concerns the morality of the people. We are presently to do a right deed, or to inflict a great wrong on others and on ourselves, and thereby entail an evil upon this continent which will blight and curse it for many an age.

A question so important seldom comes to be decided before any generation of men. This age is full of great questions, but this of Freedom is the chief. It is the same question which in other forms comes up in Europe. This is presently to be decided here in the United States by the servants of the people, I mean, by the Congress of the nation; in the name of the people; for the people, if justly decided; against them, if unjustly. If it were to be left to-morrow to the naked votes of the majority, I should have no fear. But the public servants of the people may decide otherwise. The political parties, as such, are not to pass judgment. It is not a question between whigs and democrats; old party distinctions, once so sacred and rigidly observed, here vanish out of sight. The party of Slavery or the party of Freedom is to swallow up all the other parties. Questions about tariffs and banks can hardly get a hearing. On the approach of a battle, men do not talk of the weather.

Four great men in the Senate of the United States have given us their decision; the four most eminent in the party politics of the nation—two great whigs, two great democrats. The Shibboleth of their party is forgotten by each; there is a strange unanimity in their decision. The Herod of free trade and the Pilate of protection are "made friends," when freedom is to be crucified. All four decide adverse to freedom; in favor of slavery; against the people. Their decisions are such as you might look for in the politicians of Austria and Russia. Many smaller ones have spoken on this side or on that. Last of all, but greatest, the most illustrious of the four, so far as great gifts of the understanding are concerned, a son of New England, long known, and often and deservedly honored, has given his decision....