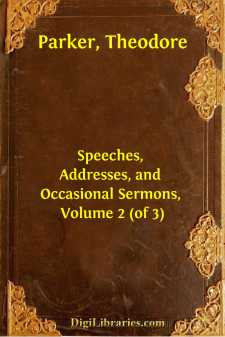 By their fruits ye shall know them.

Last Sunday I said something of the moral condition of Boston; to-day I ask your attention to a Sermon of the Spiritual Condition of Boston. I use the word spiritual in its narrower sense, and speak of the condition of this town in respect to piety. A little while since, in a sermon of piety, I tried to show that love of God lay at the foundation of all manly excellence, and was the condition of all noble, manly development; that love of truth, love of justice, love of love, were respectively the condition of intellectual, moral, and affectional development, and that they were also respectively the intellectual, moral, and affectional forms of piety; that the love of God as the Infinite Father, the totality of truth, justice, and love was the general condition of the total development of man's spiritual powers. But I showed, that sometimes this piety, intellectual, moral, affectional or total, did not arrive at self-consciousness; the man only unconsciously loving the Infinite in one or all these modes, and in such cases the man was a loser by frustrating his piety, and allowing it to stop in the truncated form of unconsciousness.

Now what is in you will appear out of you; if piety be there in any of these forms, in either mode, it will come out; if not there, its fruits cannot appear. You may reason forward or backward: if you know piety exists, you may foretell its appearance; if you find fruits thereof, you may reason back and be sure of its existence. Piety is love of God as God, and as we only love what we are like, and in that degree, so it is also a likeness to God. Now it is a general doctrine in Christendom that divinity must manifest itself; and, in assuming the highest form of manifestation known to us, divinity becomes humanity. However, that doctrine is commonly taught in the specific and not generic form, and is enforced by an historical and concrete example, but not by way of a universal thesis. It appears thus: The Christ was God; as such He must manifest himself; the form of manifestation was that of a complete and perfect man. I reject the concrete example, but accept the universal doctrine on which the special dogma of the Trinity is erected. From that I deduce this as a general rule: If you follow the law of your nature, and are simple and true to that, as much of godhead as there is in you, so much of manhood will come out of you, and, as much of manhood comes out of you, so much of godhead was there within you; as much subjective divinity, so much objective humanity.

Such being the case, the demands you can make on a man for manliness must depend for their answer on the amount of piety on deposit in his character; so it becomes important to know the condition of this town in respect of piety, for if this be not right in the above sense, nothing else is right; or, to speak more clerically, "Unless the Lord keep the city, the watchman waketh but in vain," and unless piety be developed or a-developing in men, it is vain for the minister to sit up late of a Saturday night to concoct his sermon, and to rise up early of a Sunday morning to preach the same; he fights but as one that beateth the air, and spends his strength for that which is nought....