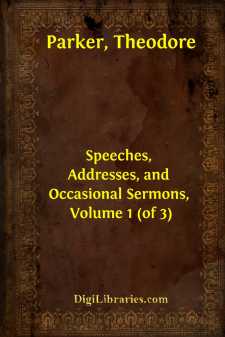 In all the world there is nothing so remarkable as a great man; nothing so rare; nothing which so well repays study. Human nature is loyal at its heart, and is, always and everywhere, looking for this its true earthly sovereign. We sometimes say that our institutions, here in America, do not require great men; that we get along better without than with such. But let a real, great man light on our quarter of the planet; let us understand him, and straightway these democratic hearts of ours burn with admiration and with love. We wave in his words, like corn in the harvest wind. We should rejoice to obey him, for he would speak what we need to hear. Men are always half expecting such a man. But when he comes, the real, great man that God has been preparing,—men are disappointed; they do not recognize him. He does not enter the city through the gates which expectants had crowded. He is a fresh fact, brand new; not exactly like any former fact. Therefore men do not recognize nor acknowledge him. His language is strange, and his form unusual. He looks revolutionary, and pulls down ancient walls to build his own temple, or, at least, splits old rocks asunder, and quarries anew fresh granite and marble.

There are two classes of great men. Now and then some arise whom all acknowledge to be great, soon as they appear. Such men have what is true in relation to the wants and expectations of to-day. They say, what many men wished but had not words for; they translate into thought what, as a dim sentiment, lay a burning in many a heart, but could not get entirely written out into consciousness. These men find a welcome. Nobody misunderstands them. The world follows at their chariot-wheels, and flings up its cap and shouts its huzzas,—for the world is loyal, and follows its king when it sees and knows him. The good part of the world follows the highest man it comprehends; the bad, whoever serves its turn.

But there is another class of men so great, that all cannot see their greatness. They are in advance of men's conjectures, higher than their dreams; too good to be actual, think some. Therefore, say many, there must be some mistake; this man is not so great as he seems; nay, he is no great man at all, but an impostor. These men have what is true not merely in relation to the wants and expectations of men here and to-day; but what is true in relation to the Universe, to Eternity, to God. They do not speak what you and I have been trying to say, and cannot; but what we shall one day years hence, wish to say, after we have improved and grown up to man's estate.

Now it seems to me, the men of this latter class, when they come, can never meet the approbation of the censors and guides of public opinion. Such as wished for a new great man had a superstition of the last one in their minds. They expected the new to be just like the old, but he is altogether unlike. Nature is rich, but not rich enough to waste any thing. So there are never two great men very strongly similar. Nay, this new great man, perhaps, begins by destroying much that the old one built up with tears and prayers. He shows, at first, the limitations and defects of the former great man; calls in question his authority. He refuses all masters; bows not to tradition; and with seeming irreverence, laughs in the face of the popular idols. How will the "respectable men," the men of a few good rules and those derived from their fathers "the best of men and the wisest,"—how will they regard this new great man? They will see nothing remarkable in him except that he is fluent and superficial, dangerous and revolutionary. He disturbs their notions of order; he shows that the institutions of society are not perfect; that their imperfections are not of granite or marble, but only of words written on soft wax, which may be erased and others written thereon anew. He shows that such imperfect institutions are less than one great man. The guides and censors of public opinion will not honor such a man, they will hate him. Why not? Some others not half so well bred, nor well furnished with precedents, welcome the new great man; welcome his ideas; welcome his person. They say, "Behold a Prophet."

When Jesus, the son of Mary, a poor woman, wife of Joseph the carpenter, in the little town of Nazareth, when he "began to be about thirty years old," and began also to open his mouth in the synagogues and the highways, nobody thought him a great man at all, as it seems....