Specimens with Memoirs of the Less-known British Poets, Volume 3 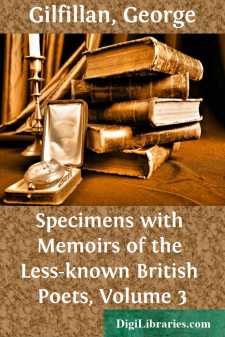 Sedley was one of those characters who exert a personal fascination over their own age without leaving any works behind them to perpetuate the charm to posterity. He was the son of Sir John Sedley of Aylesford, in Kent, and was born in 1639. When the Restoration took place he repaired to London, and plunged into all the licence of the time, shedding, however, over the putrid pool the sheen of his wit, manners, and genius. Charles was so delighted with him, that he is said to have asked him whether he had not obtained a patent from Nature to be Apollo's viceroy. He cracked jests, issued lampoons, wrote poems and plays, and, despite some great blunders, was universally admired and loved. When his comedy of 'Bellamira' was acted, the roof fell in, and a few, including the author, were slightly injured. When a parasite told him that the fire of the play had blown up the poet, house and all, Sedley replied, 'No; the play was so heavy that it broke down the house, and buried the poet in his own rubbish.' Latterly he sobered down, entered parliament, attended closely to public business, and became a determined opponent of the arbitrary measures of James II. To this he was stimulated by a personal reason. James had seduced Sedley's daughter, and made her Countess of Dorchester. 'For making my daughter a countess,' the father said, 'I have helped to make his daughter' (Mary, Princess of Orange,) 'a queen.' Sedley, thus talking, acting, and writing, lived on till he was sixty- two years of age. He died in 1701.

He has left nothing that the world can cherish, except such light and graceful songs, sparkling rather with point than with poetry, as we quote below.

TO A VERY YOUNG LADY.

1 Ah, Chloris! that I now could sit    As unconcerned, as when  Your infant beauty could beget    No pleasure, nor no pain.

2 When I the dawn used to admire,    And praised the coming day;  I little thought the growing fire    Must take my rest away.

3 Your charms in harmless childhood lay,    Like metals in the mine,  Age from no face took more away,    Than youth concealed in thine.

4 But as your charms insensibly    To their perfection pressed,  Fond Love as unperceived did fly,    And in my bosom rest.

5 My passion with your beauty grew,    And Cupid at my heart,  Still as his mother favoured you,    Threw a new flaming dart.

7 Though now I slowly bend to love,    Uncertain of my fate,  If your fair self my chains approve,    I shall my freedom hate.

8 Lovers, like dying men, may well    At first disordered be,  Since none alive can truly tell    What fortune they must see.

1 Love still has something of the sea,    From whence his mother rose;  No time his slaves from doubt can free,    Nor give their thoughts repose.

2 They are becalmed in clearest days,    And in rough weather tossed;  They wither under cold delays,    Or are in tempests lost....