Specimens with Memoirs of the Less-known British Poets, Volume 2 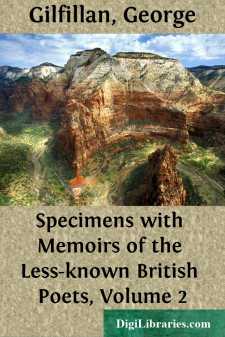 This poet might have been expected to have belonged to the 'Spasmodic school,' judging by his parental antecedents. His father was accused of having a share in Babington's conspiracy, but was released because he was godson to Queen Elizabeth. Soon after, however, he was imprisoned a second time, and condemned to death on the charge of having concealed some of the Gunpowder-plot conspirators; but was pardoned through the interest of Lord Morley. His uncle, however, was less fortunate, suffering death for his complicity with Babington. The poet's mother, the daughter of Lord Morley, was more loyal than her husband or his brother, and is said to have written the celebrated letter to Lord Monteagle, in consequence of which the execution of the Gunpowder-plot was arrested.

Our poet was born at Hindlip, Worcestershire, on the very day of the discovery of the plot, 5th November 1605. The family were Papists, and William was sent to St Omers to be educated. He was pressed to become a Jesuit, but declined. On his return to England, his father became preceptor to the poet. As he grew up, instead of displaying any taste for 'treasons, stratagems, and spoils,' he chose the better part, and lived a private and happy life. He fell in love with Lucia, daughter of William Herbert, the first Lord Powis, and celebrated her in his long and curious poem entitled 'Castara.' This lady he afterwards married, and from her society appears to have derived much happiness. In 1634, he published 'Castara.' He also, at different times, produced 'The Queen of Arragon,' a tragedy; a History of Edward IV.; and 'Observations upon History.' He died in 1654, (not as Southey, by a strange oversight, says, 'when he had just completed his fortieth year,') forty-nine years of age, and was buried in the family vault at Hindlip.

'Castara' is not a consecutive poem, but consists of a great variety of small pieces, in all sorts of style and rhythm, and of all varieties of merit; many of them addressed to his mistress under the name of Castara, and many to his friends; with reflective poems, elegies, and panegyrics, intermingled with verses sacred to love. Habington is distinguished by purity of tone if not of taste. He has many conceits, but no obscenities. His love is as holy as it is ardent. He has, besides, a vein of sentiment which sometimes approaches the moral sublime. To prove this, in addition to the 'Selections' below, we copy some verses entitled—

When I survey the bright      Celestial sphere,So rich with jewels hung, that NightDoth like an Ethiop bride appear,

My soul her wings doth spread,      And heavenward flies,The Almighty's mysteries to readIn the large volume of the skies;

For the bright firmament      Shoots forth no flameSo silent, but is eloquentIn speaking the Creator's name.

No unregarded star      Contracts its lightInto so small a character,Removed far from our human sight,

But if we steadfast look,      We shall discernIn it, as in some holy book,How man may heavenly knowledge learn....