Specimens with Memoirs of the Less-known British Poets, Complete 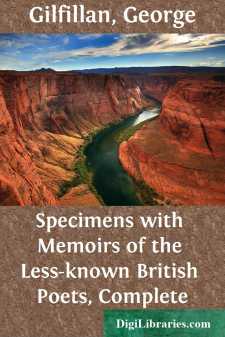 We propose to introduce our 'Specimens' by a short Essay on the Origin and Progress of English Poetry on to the days of Chaucer and of Gower. Having called, in conjunction with many other critics, Chaucer 'the Father of English Poetry,' to seek to go back further may seem like pursuing antenatal researches. But while Chaucer was the sun, a certain glimmering dawn had gone before him, and to reflect that, is the object of the following pages.

Britain, when the Romans invaded it, was a barbarous country; and although subjugated and long held by that people, they seem to have left it nearly as uncultivated and illiterate as they found it. 'No magnificent remains,' says Macaulay, 'of Latian porches and aqueducts are to be found in Britain. No writer of British birth is to be reckoned among the masters of Latin poetry and eloquence. It is not probable that the islanders were, at any time, generally familiar with the tongue of their Italian rulers. From the Atlantic to the vicinity of the Rhine the Latin has, during many centuries, been predominant. It drove out the Celtic—it was not driven out by the Teutonic—and it is at this day the basis of the French, Spanish, and Portuguese languages. In our island the Latin appears never to have superseded the old Gaelic speech, and could not stand its ground before the German.' It was in the fifth century that that modification of the German or Teutonic speech called the Anglo-Saxon was introduced into this country. It soon asserted its superiority over the British tongue, which seemed to retreat before it, reluctantly and proudly, like a lion, into the mountain-fastnesses of Wales or to the rocky sea-beach of Cornwall. The triumph was not completed all at once, but from the beginning it was secure. The bards of Wales continued to sing, but their strains resembled the mutterings of thunder among their own hills, only half heard in the distant valleys, and exciting neither curiosity nor awe. For five centuries, with the exception of some Latin words added by the preachers of Christianity, the Anglo-Saxon language continued much as it was when first introduced. Barbarous as the manners of the people were, literature was by no means left without a witness. Its chief cultivators were the monks and other religious persons, who spent their leisure in multiplying books, either by original composition or by transcription, including treatises on theology, historical chronicles, and a great abundance and variety of poetical productions. These were written at first exclusively in Latin, but occasionally, in process of time, in the Anglo- Saxon tongue. The theology taught in them was, no doubt, crude and corrupted, the history was stuffed with fables, and the poetry was rough and bald in the extreme; but still they furnished a food fitted for the awakening mind of the age. When the Christian religion reached Great Britain, it brought necessarily with it an impulse to intellect as well as to morality. So startling are the facts it relates, so broad and deep the principles it lays down, so humane the spirit it inculcates, and so ravishing the hopes it awakens, that, however disguised in superstition and clouded by imperfect representation, it never fails to produce, in all countries to which it comes, a resurrection of the nation's virtue, and a revival, for a time at least, of the nation's political and intellectual energy and genius....