Sovereign Grace Its Source, Its Nature and Its Effects 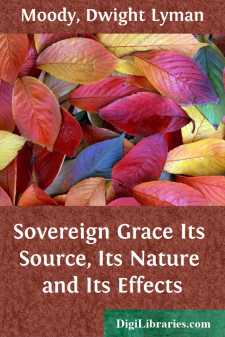 THE FOUNTAIN OF GRACE.

HERE are some words with which we have been familiar from our infancy up, and probably there are few words in the English language that are so often used as this word “GRACE.” Many of you at your table “say grace” three times a day. You seldom go into a church without hearing the word mentioned. You seldom read any part of the New Testament, especially the Epistles, without meeting the word.

There is probably not a word in the language so little understood. There are a great many who have received the grace of God into their heart, but who, if they should be asked what the word means would be troubled, and confused, and unable to tell. I experienced the grace of God a good many years before I really knew the true meaning of the word.

Now, grace means unmerited mercy—undeserved favor. If men were to wake up to the fact, they would not be talking about their own worthiness when we ask them to come to Christ. When the truth dawns upon them that Christ came to save the unworthy, then they will accept salvation. Peter calls God “the God of all grace.”

Men talk about grace, but, as a rule, they know very little about it. Let a business man go to one of your bankers to borrow a few hundred dollars for sixty or ninety days; if he is well able to pay, the banker will perhaps lend him the money if he can get another responsible man to sign the note with him. They give what they call three days’ grace after the sixty or ninety days have expired; but they will make the borrower pay interest on the money during these three days, and if he does not return principal and interest at the appointed time, they will sell his goods; they will perhaps turn him out of his house, and take the last piece of furniture in his possession. That is not grace at all; but that fairly illustrates man’s idea of it. Grace not only frees you from payment of the interest, but of the principal also.

In the Gospel by John we read, “The Word was made flesh and dwelt among us, and we beheld His glory, the glory as of the Only-begotten of the Father, full of grace and truth . . . For the law was given by Moses, but grace and truth came by Jesus Christ.” Now you know that for many years men were constantly trying to find the source of the Nile. The river of grace has been flowing through this dark earth for six thousand years, and we certainly ought to be more anxious to find out its source than to discover the source of the Nile. I think if you will read your Bible carefully you will find that this wonderful river of grace comes right from the very heart of God.

I remember being in Texas a few years ago, in a place where the country was very dry and parched. In that dry country there is a beautiful river that springs right out of the ground. It flows along; and on both sides of the river you find life and vegetation. Grace flows like that river; and you can trace its source right up to the very heart of God. You may say that its highest manifestation was seen when God gave the Son of His bosom to save this lost world....