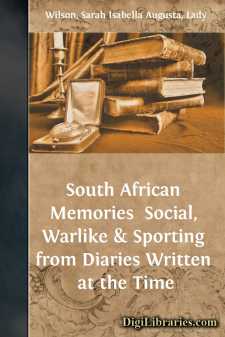 "Oh that mine adversary had written a book!"—JOB xxxi. 35.

The above words, written by one of the greatest philosophers of olden time, have often impressed me, and I have frequently quoted them when asked why I did not write an account of the interesting travels and adventures I have had in my life. It has therefore required a great deal of courage to take up my pen and record a few recollections of South Africa. I felt that, were they ever to be written at all, it must be before the rapidly passing years diminish the interest in that land, which in the past has been the object of such engrossing attention; and that at the present time, when the impending Federation of South Africa has at length crowned the hopes of those patriots who have laboured patiently and hopefully to bring about this great result, it might be appropriate to recall those days when Englishmen, who had made South Africa their home, had much to contend with, even before the fierce struggle to keep "the flag flying" in the years of 1899-1902.

During that period, which commenced after the disaster at Majuba Hill, "equal rights" were a golden dream which only the most optimistic ever hoped to see realized. From then onwards, as old colonists have so often told me, the Boers brought up the younger generation in the belief that the "Roinek" was a coward, and in consequence their arrogance in the country districts became wellnigh intolerable, while at the Cape the Bond party grew so strong it bid fair to elbow out the English altogether. Now, while the country is still young, the fair prospect opens out of Briton and Boer living in amity and peace together, and mutually supplying, in the government of their vast inheritance, such elements as are wanting in the character of each.

My first visit to South Africa was a short one, and took place at the end of 1895. During the foregoing summer everyone's attention had been directed to the Transvaal, and more especially towards the Rand, by reason of the unprecedented and, as it turned out, totally unwarranted rise in the gold-mining shares of that district; in this boom, people both at home and in Johannesburg madly gambled, and large fortunes were quickly made by those who had foresight enough not to hold on too long. For already the political horizon was darkening, and the wrongs of the "Uitlanders," real and apparent as they were, became a parrot-cry, which waxed and waned, but never died away, till the ultimatum of President Kruger, in October, 1899, brought matters to a climax.

We sailed from Southampton in December, 1895, in the Tantallon Castle, then one of the most modern and up-to-date of the Castle liners. The ship was crowded to its utmost capacity, and among the passengers, as I afterwards learned, were many deeply concerned in the plotting which was known to be going on at Johannesburg, either to extort concessions from President Kruger, or, failing this, to remove him altogether....