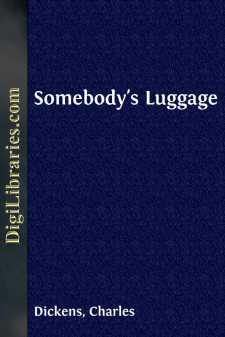 CHAPTER I—HIS LEAVING IT TILL CALLED FOR

The writer of these humble lines being a Waiter, and having come of a family of Waiters, and owning at the present time five brothers who are all Waiters, and likewise an only sister who is a Waitress, would wish to offer a few words respecting his calling; first having the pleasure of hereby in a friendly manner offering the Dedication of the same unto Joseph, much respected Head Waiter at the Slamjam Coffee-house, London, E.C., than which a individual more eminently deserving of the name of man, or a more amenable honour to his own head and heart, whether considered in the light of a Waiter or regarded as a human being, do not exist.

In case confusion should arise in the public mind (which it is open to confusion on many subjects) respecting what is meant or implied by the term Waiter, the present humble lines would wish to offer an explanation.  It may not be generally known that the person as goes out to wait is not a Waiter.  It may not be generally known that the hand as is called in extra, at the Freemasons’ Tavern, or the London, or the Albion, or otherwise, is not a Waiter.  Such hands may be took on for Public Dinners by the bushel (and you may know them by their breathing with difficulty when in attendance, and taking away the bottle ere yet it is half out); but such are not Waiters.  For you cannot lay down the tailoring, or the shoemaking, or the brokering, or the green-grocering, or the pictorial-periodicalling, or the second-hand wardrobe, or the small fancy businesses,—you cannot lay down those lines of life at your will and pleasure by the half-day or evening, and take up Waitering.  You may suppose you can, but you cannot; or you may go so far as to say you do, but you do not.  Nor yet can you lay down the gentleman’s-service when stimulated by prolonged incompatibility on the part of Cooks (and here it may be remarked that Cooking and Incompatibility will be mostly found united), and take up Waitering.  It has been ascertained that what a gentleman will sit meek under, at home, he will not bear out of doors, at the Slamjam or any similar establishment.  Then, what is the inference to be drawn respecting true Waitering?  You must be bred to it.  You must be born to it.

Would you know how born to it, Fair Reader,—if of the adorable female sex?  Then learn from the biographical experience of one that is a Waiter in the sixty-first year of his age.

You were conveyed,—ere yet your dawning powers were otherwise developed than to harbour vacancy in your inside,—you were conveyed, by surreptitious means, into a pantry adjoining the Admiral Nelson, Civic and General Dining-Rooms, there to receive by stealth that healthful sustenance which is the pride and boast of the British female constitution.  Your mother was married to your father (himself a distant Waiter) in the profoundest secrecy; for a Waitress known to be married would ruin the best of businesses,—it is the same as on the stage.  Hence your being smuggled into the pantry, and that—to add to the infliction—by an unwilling grandmother.  Under the combined influence of the smells of roast and boiled, and soup, and gas, and malt liquors, you partook of your earliest nourishment; your unwilling grandmother sitting prepared to catch you when your mother was called and dropped you; your grandmother’s shawl ever ready to stifle your natural complainings; your innocent mind surrounded by uncongenial cruets, dirty plates, dish-covers, and cold gravy; your mother calling down the pipe for veals and porks, instead of soothing you with nursery rhymes.  Under these untoward circumstances you were early weaned.  Your unwilling grandmother, ever growing more unwilling as your food assimilated less, then contracted habits of shaking you till your system curdled, and your food would not assimilate at all.  At length she was no longer spared, and could have been thankfully spared much sooner.  When your brothers began to appear in succession, your mother retired, left off her smart dressing (she had previously been a smart dresser), and her dark ringlets (which had previously been flowing), and haunted your father late of nights, lying in wait for him, through all weathers, up the shabby court which led to the back door of the Royal Old Dust-Bin (said to have been so named by George the Fourth), where your father was Head.  But the Dust-Bin was going down then, and your father took but little,—excepting from a liquid point of view.  Your mother’s object in those visits was of a house-keeping character, and you was set on to whistle your father out.  Sometimes he came out, but generally not.  Come or not come, however, all that part of his existence which was unconnected with open Waitering was kept a close secret, and was acknowledged by your mother to be a close secret, and you and your mother flitted about the court, close secrets both of you, and would scarcely have confessed under torture that you know your father, or that your father had any name than Dick (which wasn’t his name, though he was never known by any other), or that he had kith or kin or chick or child.  Perhaps the attraction of this mystery, combined with your father’s having a damp compartment, to himself, behind a leaky cistern, at the Dust-Bin,—a sort of a cellar compartment, with a sink in it, and a smell, and a plate-rack, and a bottle-rack, and three windows that didn’t match each other or anything else, and no daylight,—caused your young mind to feel convinced that you must grow up to be a Waiter too; but you did feel convinced of it, and so did all your brothers, down to your sister.  Every one of you felt convinced that you was born to the Waitering.  At this stage of your career, what was your feelings one day when your father came home to your mother in open broad daylight,—of itself an act of Madness on the part of a Waiter,—and took to his bed (leastwise, your mother and family’s bed), with the statement that his eyes were devilled kidneys.  Physicians being in vain, your father expired, after repeating at intervals for a day and a night, when gleams of reason and old business fitfully illuminated his being, “Two and two is five.  And three is sixpence.”  Interred in the parochial department of the neighbouring churchyard, and accompanied to the grave by as many Waiters of long standing as could spare the morning time from their soiled glasses (namely, one), your bereaved form was attired in a white neckankecher, and you was took on from motives of benevolence at The George and Gridiron, theatrical and supper.  Here, supporting nature on what you found in the plates (which was as it happened, and but too often thoughtlessly, immersed in mustard), and on what you found in the glasses (which rarely went beyond driblets and lemon), by night you dropped asleep standing, till you was cuffed awake, and by day was set to polishing every individual article in the coffee-room.  Your couch being sawdust; your counterpane being ashes of cigars.  Here, frequently hiding a heavy heart under the smart tie of your white neckankecher (or correctly speaking lower down and more to the left), you picked up the rudiments of knowledge from an extra, by the name of Bishops, and by calling plate-washer, and gradually elevating your mind with chalk on the back of the corner-box partition, until such time as you used the inkstand when it was out of hand, attained to manhood, and to be the Waiter that you find yourself....