Some Turns of Thought in Modern Philosophy Five Essays 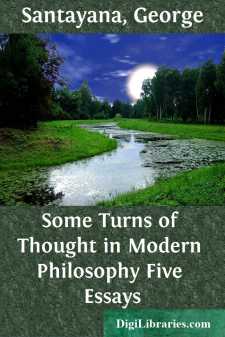 I LOCKE AND THE FRONTIERS OF COMMON SENSE

A good portrait of Locke would require an elaborate background. His is not a figure to stand statuesquely in a void: the pose might not seem grand enough for bronze or marble. Rather he should be painted in the manner of the Dutch masters, in a sunny interior, scrupulously furnished with all the implements of domestic comfort and philosophic enquiry: the Holy Bible open majestically before him, and beside it that other revelation—the terrestrial globe. His hand might be pointing to a microscope set for examining the internal constitution of a beetle: but for the moment his eye should be seen wandering through the open window, to admire the blessings of thrift and liberty manifest in the people so worthily busy in the market-place, wrong as many a monkish notion might be that still troubled their poor heads. From them his enlarged thoughts would easily pass to the stout carved ships in the river beyond, intrepidly setting sail for the Indies, or for savage America. Yes, he too had travelled, and not only in thought. He knew how many strange nations and false religions lodged in this round earth, itself but a speck in the universe. There were few ingenious authors that he had not perused, or philosophical instruments that he had not, as far as possible, examined and tested; and no man better than he could understand and prize the recent discoveries of "the incomparable Mr Newton". Nevertheless, a certain uneasiness in that spare frame, a certain knitting of the brows in that aquiline countenance, would suggest that in the midst of their earnest eloquence the philosopher's thoughts might sometimes come to a stand. Indeed, the visible scene did not exhaust the complexity of his problem; for there was also what he called "the scene of ideas", immaterial and private, but often more crowded and pressing than the public scene. Locke was the father of modern psychology, and the birth of this airy monster, this half-natural changeling, was not altogether easy or fortunate.

I wish my erudition allowed me to fill in this picture as the subject deserves, and to trace home the sources of Locke's opinions, and their immense influence. Unfortunately, I can consider him—what is hardly fair—only as a pure philosopher: for had Locke's mind been more profound, it might have been less influential. He was in sympathy with the coming age, and was able to guide it: an age that confided in easy, eloquent reasoning, and proposed to be saved, in this world and the next, with as little philosophy and as little religion as possible. Locke played in the eighteenth century very much the part that fell to Kant in the nineteenth. When quarrelled with, no less than when embraced, his opinions became a point of departure for universal developments. The more we look into the matter, the more we are impressed by the patriarchal dignity of Locke's mind. Father of psychology, father of the criticism of knowledge, father of theoretical liberalism, god-father at least of the American political system, of Voltaire and the Encyclopaedia, at home he was the ancestor of that whole school of polite moderate opinion which can unite liberal Christianity with mechanical science and with psychological idealism....