"Some Say" Neighbours in Cyrus 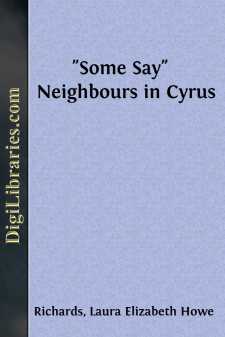 "And some say, she expects to get him married to Rose Ellen before the year's out!"

"Her sister married a minister, and her father was a deacon, so mebbe she thinks she's got a master-key to the Kingdom. But I don't feel so sure of her gettin' this minister for Rose Ellen. Some say he's so wropped up in his garden truck that he don't know a gal from a gooseberry bush. He! he!"

The shrill cackle was answered by a slow, unctuous chuckle, as of a fat and wheezy person; then a door was closed, and silence fell.

The minister looked up apprehensively; his fair face was flushed, and his mild, blue eyes looked troubled. He gazed at the broad back of his landlady, as she stood dusting, with minute care, the china ornaments on the mantelpiece; but her back gave no sign. He coughed once or twice; he said, "Mrs. Mellen!" tentatively, first low, then in his ordinary voice, but there was no reply. Was Mrs. Mellen deaf? he had not noticed it before. He pondered distressfully for a few moments; then dropped his eyes, and the book swallowed him again. Yet the sting remained, for when presently the figure at the mantelpiece turned round, he looked up hastily, and flushed again as he met his hostess' gaze, calm and untroubled as a summer pool.

"There, sir!" said Mrs. Mellen, cheerfully. "I guess that's done to suit. Is there anything more I can do for you before I go?"

The minister's mind hovered between two perplexities; a glance at the book before him decided their relative importance.

"Have you ever noticed, Mrs. Mellen, whether woodcocks are more apt to fly on moonshiny nights, as White assures us?"

"Woodbox?" said Mrs. Mellen. "Why, yes, sir, it's handy by; and when there's no moon, the lantern always hangs in the porch. But I'll see that Si Jones keeps it full up, after this."

Decidedly, the good woman was deaf, and she had not heard. Could those harpies be right? If any such idea as they suggested were actually in his hostess' mind, he must go away, for his work must not be interfered with, and he must not encourage hopes,—the minister blushed again, and glanced around to see if any one could see him.

But he was so comfortable here, and Miss Mellen was so intelligent, so helpful; and this seemed the ideal spot on which to compile his New England "Selborne."

He sighed, and thought of the woodcock again. Why should the bird prefer a moonshiny night? Was it likely that the creature had any appreciation of the beauties of nature? Shakespeare uses the woodcock as a simile of folly, to express a person without brains. Ha!

The door opened, and Rose Ellen came in, her eyes shining with pleasure, her hands full of gold and green.

The minister rose, and inspected the flowers delightedly. "This is it, surely!" he repeated. "Stem stout, hairy above; leaves large, oblong, or the lower spatulate-oval, and tapering into a marginal petiole, serrate veiny; heads numerous; seeds obtuse or acute; disk-flowers, 16 x 24. This is, indeed, a treasure, for Gray calls it 'rare in New England.' I congratulate you, Miss Mellen."

"Don't you want I should make some biscuit for supper, mother?" asked Rose Ellen, coming out of her rapt contemplation of the goldenrod that Gray condescended to call rare, he to whom all things were common.

Her mother made no answer.

"Don't you want I should make a pan of biscuit?" Rose Ellen repeated. Still there was no reply, and the girl turned to look at her mother in some alarm.

"Why, mother, what is the matter? why don't you answer me?"