Some Remarks on the Tragedy of Hamlet, Prince of Denmark, Written by Mr. William Shakespeare (1736) 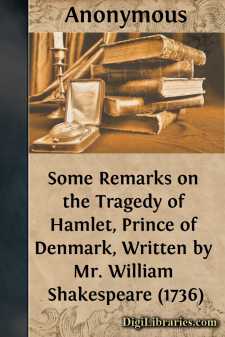 The identity of the "Anonymous" of Some Remarks on Hamlet Prince of Denmark has never been established. The tradition that Hanmer wrote the essay had its highly dubious origin in a single unsupported statement by Sir Henry Bunbury, made over one hundred years after the work was written, in his Correspondence of Sir Thomas Hanmer, with a Memoir of His Life (London, 1838), to the effect that he had reason to believe that Hanmer was the author. The evidence against this bare surmise is such, however, as to compel assent to Professor Lounsbury's judgment that Hanmer's authorship "is so improbable that it may be called impossible" (Shakespeare as a Dramatic Artist, 60). I have elsewhere set down reasons for my own belief that Hanmer could have had nothing to do with the composition of the essay, arguing on grounds of ideas, attitudes, style, and other internal evidence ("Thomas Hanmer and the Anonymous Essay on Hamlet," _MLN_61 [1934], 493-498). Without going over the case again, I wish here merely to reaffirm my conviction that Hanmer was not the author, and to say that it would seem that the difference in styles and the attitude of Anonymous toward Pope and Theobald are alone convincing proof that Hanmer had no part in the Remarks. Hanmer's style is stiff, formal, pedantic; the style of the essay is free, easy, direct, more in the Addison manner. Hanmer was a disciple of Pope's, and in his Preface to his Shakespeare and in his edition as a whole shows allegiance to Pope. Anonymous, on the contrary, decisively, though urbanely, rejects Pope's edition in favor of Theobald's text and notes. The fact that Theobald was at that time still the king of dunces in the Dunciad, adds to the improbability that an admirer of Pope's, as Hanmer certainly was, would pay Theobald such honor.

Most careful scholars of our day go no further on the question of authorship than to note that the essay has been "attributed" to Hanmer; some, like Professor Stoll, seem to have dropped the idea that Hanmer was in any way connected with it and safely speak of "the author" or "the anonymous author"; I recall only one case in recent years of an all-out, incautious assignment of the authorship to Hanmer ("Hamlet among the Mechanists," Shakespeare Association Bulletin 17 [July, 1942], 138). It would seem advisable to follow Stoll's lead and ignore Hanmer entirely.

The anonymous essay has been of continued interest to students of Shakespeare. Echoes of its ideas if not its words appear in such later critics of the eighteenth century as Gentleman, Steevens, Richardson, and Morgann; in 1790 Malone copied out some two pages of the best of it for publication; and in 1864 the whole was reprinted, a not too usual thing for an obscure eighteenth century pamphlet. Present-day students of Shakespeare, among them D.N. Smith, Lounsbury, Babcock, Lawrence, and Stoll have treated the essay with unvarying respect. Remarking that it anticipates some of Johnson's arguments, Smith calls it in general a "well-written, interesting book" greatly superior to the anonymous essay on Hamlet of 1752 (Eighteenth Century Essays on Shakespeare, xxn)....