Some Diversions of a Man of Letters 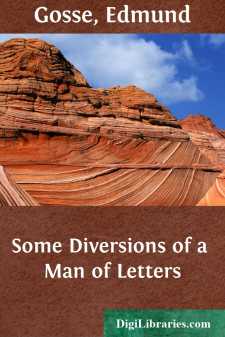 PREFACE: ON FLUCTUATIONS OF TASTE

When Voltaire sat down to write a book on Epic Poetry, he dedicated his first chapter to "Differences of Taste in Nations." A critic of to-day might well find it necessary, on the threshold of a general inquiry, to expatiate on "Differences of Taste in Generations." Changes of standard in the arts are always taking place, but it is only with advancing years, perhaps, that we begin to be embarrassed by the recurrence of them. In early youth we fight for the new forms of art, for the new æsthetic shibboleths, and in that happy ardour of battle we have no time or inclination to regret the demigods whom we dispossess. But the years glide on, and, behold! one morning, we wake up to find our own predilections treated with contempt, and the objects of our own idolatry consigned to the waste-paper basket. Then the matter becomes serious, and we must either go on struggling for a cause inevitably lost, or we must give up the whole matter in indifference. This week I read, over the signature of a very clever and very popular literary character of our day, the remark that Wordsworth's was "a genteel mind of the third rank." I put down the newspaper in which this airy dictum was printed, and, for the first time, I was glad that poor Mr. Matthew Arnold was no longer with us. But, of course, the evolutions of taste must go on, whether they hurt the living and the dead, or no.

Is there, then, no such thing as a permanent element of poetic beauty? The curious fact is that leading critics in each successive generation are united in believing that there is, and that the reigning favourite conforms to it. The life of a reputation is like the life of a plant, and seems, in these days, to be like the life of an annual. We watch the seed, admiration for Wordsworth, planted about 1795, shoot obscurely from the ground, and gradually clothe itself with leaves till about 1840; then it bursts into blossom of rapturous praise, and about 1870 is hung with clusters of the fruit of "permanent" appreciation. In 1919, little more than a century from its first evolution in obscurity, it recedes again in the raggedness of obloquy, and cumbers the earth, as dim old "genteel" Wordsworth, whom we are assured that nobody reads. But why were "the best judges" scornful in 1800 and again in 1919 of what gave the noblest and the most inspiriting pleasure to "the best judges" in 1870? The execution of the verse has not altered, the conditions of imagination seem the same, why then is the estimate always changing? Is every form of poetic taste, is all trained enjoyment of poetry, merely a graduated illusion which goes up and down like a wave of the sea and carries "the best judges" with it? If not, who is right, and who is wrong, and what is the use of dogmatising? Let us unite to quit all vain ambition, and prefer the jangle of the music-halls, with its direct "æsthetic thrill."

So far as I know, the only philosopher who has dared to face this problem is Mr. Balfour, in the brilliant second chapter of his "Foundations of Belief." He has there asked, "Is there any fixed and permanent element in beauty?" The result of his inquiry is disconcerting; after much discussion he decides that there is not....