Smith and the Pharaohs, and other Tales 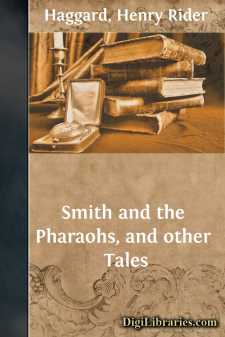 SMITH AND THE PHARAOHS I

Scientists, or some scientists—for occasionally one learned person differs from other learned persons—tell us they know all that is worth knowing about man, which statement, of course, includes woman. They trace him from his remotest origin; they show us how his bones changed and his shape modified, also how, under the influence of his needs and passions, his intelligence developed from something very humble. They demonstrate conclusively that there is nothing in man which the dissecting-table will not explain; that his aspirations towards another life have their root in the fear of death, or, say others of them, in that of earthquake or thunder; that his affinities with the past are merely inherited from remote ancestors who lived in that past, perhaps a million years ago; and that everything noble about him is but the fruit of expediency or of a veneer of civilisation, while everything base must be attributed to the instincts of his dominant and primeval nature. Man, in short, is an animal who, like every other animal, is finally subdued by his environment and takes his colour from his surroundings, as cattle do from the red soil of Devon. Such are the facts, they (or some of them) declare; all the rest is rubbish.

At times we are inclined to agree with these sages, especially after it has been our privilege to attend a course of lectures by one of them. Then perhaps something comes within the range of our experience which gives us pause and causes doubts, the old divine doubts, to arise again deep in our hearts, and with them a yet diviner hope.

Perchance when all is said, so we think to ourselves, man is something more than an animal. Perchance he has known the past, the far past, and will know the future, the far, far future. Perchance the dream is true, and he does indeed possess what for convenience is called an immortal soul, that may manifest itself in one shape or another; that may sleep for ages, but, waking or sleeping, still remains itself, indestructible as the matter of the Universe.

An incident in the career of Mr. James Ebenezer Smith might well occasion such reflections, were any acquainted with its details, which until this, its setting forth, was not the case. Mr. Smith is a person who knows when to be silent. Still, undoubtedly it gave cause for thought to one individual—namely, to him to whom it happened. Indeed, James Ebenezer Smith is still thinking over it, thinking very hard indeed.

J. E. Smith was well born and well educated. When he was a good-looking and able young man at college, but before he had taken his degree, trouble came to him, the particulars of which do not matter, and he was thrown penniless, also friendless, upon the rocky bosom of the world. No, not quite friendless, for he had a godfather, a gentleman connected with business whose Christian name was Ebenezer. To him, as a last resource, Smith went, feeling that Ebenezer owed him something in return for the awful appellation wherewith he had been endowed in baptism....