'Smiles' A Rose of the Cumberlands 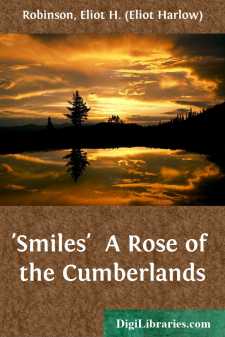 The man came to a stop, a look of humiliation and deep self-disgust on his bronzed face. With methodical care he leaned his rifle against the seamed trunk of a forest patriarch and drew the sleeve of his hunting shirt across his forehead, now glistening with beads of sweat; then, and not until then, did he relieve his injured feelings by giving voice to a short but soul-satisfying expletive.

At the sound of his deep voice the dog, which had, panting, dropped at his feet after a wild, purposeless dash through the underbrush, looked up with bright eyes whose expression conveyed both worship and a question, and, as the man bent and stroked his wiry coat, rustled the pine needles with his stubby tail.

The picture held no other animate creatures, and no other sound disturbed the silence of the woods.

By the hunter's serviceable nickeled timepiece the afternoon was not spent; but the sun was already swinging low over the western mountaintop, and its slanting rays, as they filtered through the leafy network overhead, had begun to take on the richer gold of early evening, and the thick forest foliage of oddly intermingled oak and pine, beech and poplar, was assuming deeper, more velvety tones. There was solemn beauty in the scene; but, for the moment, the man was out of tune with the vibrant color harmonies, and he frankly stated the reason in his next words, which were addressed to his unlovely canine companion, whose sagacity more than compensated for his appealing homeliness.

City born and bred though he was, the man took a not unjustifiable pride in the woodcraft which he had acquired during many vacations spent in the wilds; hence it was humiliating to have to admit that fact—even to his dog. To be sure, the fastnesses of the border Cumberlands were new to him; but his vanity was hurt by the realization that he had tramped for nearly an hour through serried ranks of ancient trees and crowding thickets of laurel and rhododendron—which seemed to take a personal delight in impeding the progress of a "furriner"—and over craggy rocks, only to find, at the end of that time, that he was entering one end of a short ravine from the other end of which he had started with the vague purpose of seeking the path by which he had climbed from the valley village.

Moreover, a subtle change was taking place in the air. Faint breezes, the sighing heralds of advancing evening, were now beginning to steal slowly out from the picturesque, seamed rocks of the ravine and from behind each gnarled or stately tree, with an unmistakable warning.

There was clearly but one logical course for him to pursue—head straight up the mountainside until he should arrive at some commanding clearing whence he could recover his lost bearings and establish some landmarks for a fresh start downward. With his square jaw set in a decisive manner, the man picked up his gun, threw back his heavy shoulders, and began to climb, driving his muscular body forcibly through the underbrush....