Small Gardens and How to Make the Most of Them 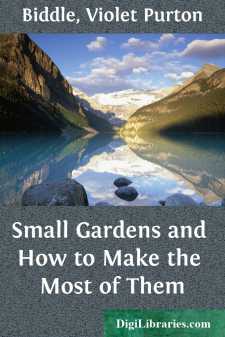 CHAPTER I The General Arrangement of the Garden

What to go in for, and what to avoid—Brick walls—Trees, their advantages and disadvantages, etc.

It is imperative that a small garden, such as one generally finds attached to suburban or small houses, should be made the very most of. Frequently, however, its owners seem to think that to attempt to grow anything in such a little plot of ground is a veritable waste of time and money, as nothing ever comes of it. The aim of this book is to show that even the tiniest piece of land can be made pretty and even profitable, if due attention be given it.

WELL BEGUN IS HALF DONE. To begin with, it is well to remember that the tenant of a small garden should not endeavour to represent every feature he sees in large grounds; the poverty-stricken shrubbery and pond just about large enough for a nice bath, are too often seen, and only call forth ridicule. Some landscape gardeners have even objected to the presence of a lawn, where the space at disposal is very limited indeed, but to my mind a little turf is always advisable, for it not only entices people into the fresh air for a game, but forms a good foil for flowering plants, and above all looks so well during the winter.

A long narrow garden is always easier to deal with than a square plot of land, the range of vision not being “brought up short,” as it were. It is well to take heed of this fact where there is any choice in the matter. Good brick walls are a great help in gardening, though alas! in these hurried days they are becoming much rarer, the wooden fence being run up so quickly, and at far less expense.

As regards the walks, it is better to have one path wide enough for two people abreast than several unsociably narrow ones. Each path should lead somewhere, to the summer-house, or a gate, for instance: otherwise it looks inconsequent.

Besides the flower-garden proper, a nursery for making experiments, sowing seeds, and striking cuttings, should find a place, if possible; a rubbish-heap is invaluable, too, where all decayed vegetable refuse, road-scraping, soapsuds, etc., should be thrown. In autumn, all the leaves the gardener sweeps up should be placed near by, both heaps being frequently turned over to allow of the noxious gas escaping, and to assist decomposition. The rubbish corner should be at the furthest extremity of the garden, though it need not be unsightly if a screen is placed around it. Privet is certainly the quickest growing shrub for that purpose, but, as it is so common, other shrubs, such as pyrus japonica, arbutus, barberry, and pyracantha, may be used.

THE JOYS OF A GREENHOUSE. If there is no greenhouse, try to obtain one; it is such an infinite delight all through the dark months of the year, and this without any great cost for fuel. A Rippingille oil-stove, with one four-inch wick, will suffice to keep the frost out of a structure measuring 16 × 10, if a lean-to (that is, attached to a dwelling-house). Even this expense may be avoided where it is built against a kitchen wall, though, if the wall happened to face north, only ferns and just a few flowers would thrive. But even these would form a great interest, especially to invalids, who often find their greatest pleasure in pottering about under their “little bit of glass.”

A VEXED QUESTION. The vexed question of lopping one’s neighbours’ trees is sure to crop up sooner or later. However much detriment the trees may be doing, by preventing the free access of sun and air, tenants should know that the law only justifies them in cutting down those branches which actually overhang their own domains. This being the case, it is often the best “to grin and bear it,” and lop the trees as little as possible, for we must acknowledge that the fine form of a tree is always spoilt when interfered with to any great extent. If the border would, in any case be shady, so much the better; it will only require a little more attention in the matter of watering, etc. After all, shade from the hot summer sun is absolutely necessary if we would enjoy a garden, therefore it is always well to hesitate over an act which takes but a few minutes to do, but may need years to repair. Where the trees overhang a good south or west wall the matter is more serious; it is then advisable to cut back as far as possible, for roses, peach-trees, and, indeed, most climbers resent the constant drip they are obliged to endure in wet weather....