Slave Narratives: a Folk History of Slavery in the United States From Interviews with Former Slaves South Carolina Narratives, Part 4 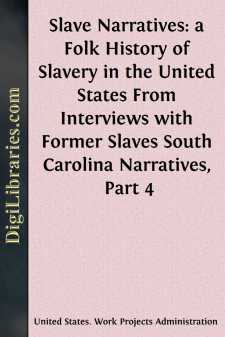 Mary Raines is the oldest living person, white or black, in Fairfield County. If she survives until next December, she will have attained her century of years. She lives with her widowed daughter, Fannie McCollough, fifty-seven years old, and a son, Joe Raines, aged 76 years. They rent a two-room frame house, on lands of Mrs. Sallie Wylie, Chester County, S.C. Joe, the son, is a day laborer on nearby farms. Fannie cooks for Mrs. W.T. Raines. Old Mother Mary has been receiving a county pension of $5.00 per month for several years.

"How old would Marse William Woodward be if he hadn't died befo' I gwine to die? A hundred and twenty, you say? Well, dat's 'bout de way I figured my age. Him was a nephew of Marse Ed, de fust Marse Ed P. Mobley. Him say dat when him 'come twenty-one, old marster give him a birthday dinner and 'vite folks to it. Marse Riley McMaster, from Winnsboro, S.C., was dere a flyin' 'round my young mistress, Miss Harriett. Marse Riley was a young doctor, ridin' 'round wid saddlebags. While they was all settin' down to dinner, de young doctor have to git up in a hurry to go see my mammy. Left his plate piled up wid turkey, nice dressin', rice and gravy, candy 'tatoes, and apple marmalade and cake. De wine 'canter was a settin' on de 'hogany sideboard. All dis him leave to go see mammy, who was a squallin' lak a passle of patarollers (patrollers) was a layin' de lash on her. When de young doctor go and come back, him say as how my mammy done got all right and her have a gal baby. Then him say dat Marse Ed, his uncle, took him to de quarter where mammy was, look me all over and say: 'Ain't her a good one? Must weigh ten pounds. I's gwine to name dis baby for your mama, William. Tell her I name her, Mary, for her, but I 'spects some folks'll call her 'Polly', just lak they call your mama, 'Polly'.

"I was a strong gal, went to de field when I's twelve years old, hoe my acre of cotton, 'long wid de grown ones, and pick my 150 pounds of cotton. As I wasn't scared of de cows, they set me to milkin' and churnin'. Bless God! Dat took me out of de field. House servants 'bove de field servants, them days. If you didn't git better rations and things to eat in de house, it was your own fault, I tells you! You just have to help de chillun to take things and while you doin' dat for them, you take things for yourself. I never call it stealin'. I just call it takin' de jams, de jellies, de biscuits, de butter and de 'lasses dat I have to reach up and steal for them chillun to hide 'way in deir little stomaches, and me, in my big belly.

"When Joe drive de young doctor, Marse Riley, out to see Mass Harriett, while Marse Riley doin' his courtin' in de parlor, Joe was doin' his courtin' in de kitchen. Joe was as smart as de nex' one. Us made faster time than them in de parlor; us beat them to de marriage. Marse Riley call it de altar, but Joe always laugh and say it was de halter. Many is de time I have been home wid them sixteen chillun, when him was a gallavantin' 'round, and I wished I had a got a real halter on dat husband of mine.

"I b'longs to de Gladden's Grove African Methodist 'Piscopal Church. Too old to shout but de great day is comin', when I'll shout and sing to de music of dat harp of 10,000 strings up yonder. Oh! Won't dat be a joyful day, when dese old ailin' bones gonna rise again." (Then the old darkey became suffused in tears, lapsed into a silence and apathy, from which she couldn't be aroused. Finally she slumbered and snored. It would have been unkind to question her further.)

At the age of one hundred and three, Frank Range is a familiar figure on the streets of Greenville, talking freely of pre-Civil and Civil War days, and the part he played in the war....