Slave Narratives: a Folk History of Slavery in the United States From Interviews with Former Slaves, North Carolina Narratives, Part 1 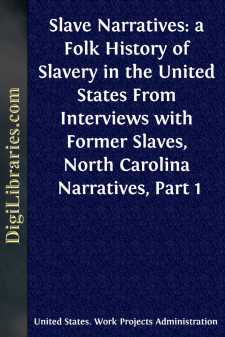 My name is Louisa Adams. I wuz bawned in Rockingham, Richmond County, North Carolina. I wuz eight years old when the Yankees come through. I belonged to Marster Tom A. Covington, Sir. My mother wuz named Easter, and my father wuz named Jacob. We were all Covingtons. No Sir, I don't know whur my mother and father come from. Soloman wuz brother number one, then Luke, Josh, Stephen, Asbury. My sisters were Jane, Frances, Wincy, and I wuz nex'. I 'members grandmother. She wuz named Lovie Wall. They brought her here from same place. My aunts were named, one wuz named Nicey, and one wuz named Jane. I picked feed for the white folks. They sent many of the chillun to work at the salt mines, where we went to git salt. My brother Soloman wuz sent to the salt mines. Luke looked atter the sheep. He knocked down china berries for 'em. Dad and mammie had their own gardens and hogs. We were compelled to walk about at night to live. We were so hongry we were bound to steal or parish. This trait seems to be handed down from slavery days. Sometimes I thinks dis might be so. Our food wuz bad. Marster worked us hard and gave us nuthin. We had to use what we made in the garden to eat. We also et our hogs. Our clothes were bad, and beds were sorry. We went barefooted in a way. What I mean by that is, that we had shoes part of the time. We got one pair o' shoes a year. When dey wored out we went barefooted. Sometimes we tied them up with strings, and they were so ragged de tracks looked like bird tracks, where we walked in the road. We lived in log houses daubed with mud. They called 'em the slaves houses. My old daddy partly raised his chilluns on game. He caught rabbits, coons, an' possums. We would work all day and hunt at night. We had no holidays. They did not give us any fun as I know. I could eat anything I could git. I tell you de truth, slave time wuz slave time wid us. My brother wore his shoes out, and had none all thu winter. His feet cracked open and bled so bad you could track him by the blood. When the Yankees come through, he got shoes.

I wuz married in Rockingham. I don't 'member when Mr. Jimmie Covington, a preacher, a white man, married us. I married James Adams who lived on a plantation near Rockingham. I had a nice blue wedding dress. My husband wuz dressed in kinder light clothes, best I rickerlect. It's been a good long time, since deen.

I sho do 'member my Marster Tom Covington and his wife too, Emma. Da old man wuz the very Nick. He would take what we made and lowance us, dat is lowance it out to my daddy after he had made it. My father went to Steven Covington, Marster Tom's brother, and told him about it, and his brother Stephen made him gib father his meat back to us.

My missus wuz kind to me, but Mars. Tom wuz the buger. It wuz a mighty bit plantation. I don't know how many slaves wuz on it, there were a lot of dem do'. Dere were overseers two of 'em. One wuz named Bob Covington and the other Charles Covington. They were colored men. I rode with them....