Slave Narratives: a Folk History of Slavery in the United States From Interviews with Former Slaves Maryland Narratives 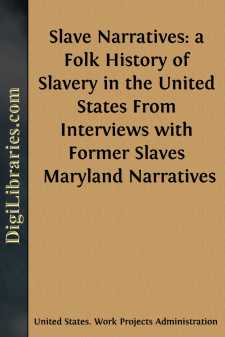 Aunt Lucy, an ex-slave, lives with her son, Lafayette Brooks, in a shack on the Carroll Inn Springs property at Forest Glen, Montgomery County, Md.

To go to her home from Rockville, leave the Court House going east on Montgomery Ave. and follow US Highway No. 240, otherwise known as the Rockville Pike, in its southeasterly direction, four and one half miles to the junction with it on the left (east) of the Garrett Park Road. This junction is directly opposite the entrance to the Georgetown Preparatory School, which is on the west of this road. Turn left on the Garrett Park Road and follow it through that place and crossing Rock Creek go to Kensington. Here cross the tracks of the B.&O. R.R. and parallel them onward to Forest Glen. From the railroad station in this place go onward to Forest Glen. From the railroad station in this place go onward on the same road to the third lane branching off to the left. This lane will be identified by the sign "Carroll Springs Inn". Turn left here and enter the grounds of the inn. But do not go up in front of the inn itself which is one quarter of a mile from the road. Instead, where the drive swings to the right to go to the inn, bear to the left and continue downward fifty yards toward the swimming pool. Lucy's shack is on the left and one hundred feet west of the pool. It is about eleven miles from Rockville.

Lucy is an usual type of Negro and most probably is a descendant of less remotely removed African ancestors than the average plantation Negroes. She does not appear to be a mixed blood—a good guess would be that she is pure blooded Senegambian. She is tall and very thin, and considering her evident great age, very erect, her head is very broad, overhanging ears, her forehead broad and not so receeding as that of the average. Her eyes are wide apart and are bright and keen. She has no defect in hearing.

Following are some questions and her answers:

"Lucy, did you belong to the Carrolls before the war?" "Nosah, I didne lib around heah den. Ise born don on de bay".

"Dunno sah. Miss Anne, she had it written down in her book, but she said twas too much trouble for her to be always lookin it up". (Her son, Lafayette, says he was her eldest child and that he was born on the Severn River, in Maryland, the 15th day of October, 1872. Supposing the mother was twenty-five years old then, she would be about ninety now. Some think she is more than a hundred years old).

"Who did you belong to?"

"I belonged to Missus Ann Garner".

"Did she have many slaves?"

"Yassuh. She had seventy-five left she hadnt sold when the war ended".

"What kind of work did you have to do?"

"O, she would set me to pickin up feathers round de yaird. She had a powerful lot of geese. Den when I got a little bigger she had me set the table. I was just a little gal then. Missus used to say that she was going to make a nurse outen me. Said she was gwine to sen me to Baltimo to learn to be a nurse".

"And what did you think about that?"

"Oh; I thought that would be fine, but he war came befo I got big enough to learn to be a nurse"....