Slave Narratives: a Folk History of Slavery in the United States From Interviews with Former Slaves Kentucky Narratives 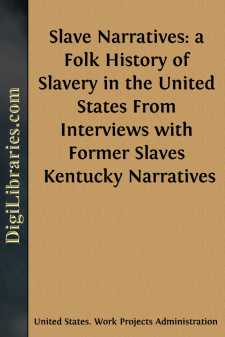 Uncle Dan tells me "he was born May 5, 1858 at the Abe Wheeler place near Spoonsville, now known as Nina, about nine miles due east from Lancaster. Mother, whose name was Lucinda Wheeler, belonged to the Wheeler family. My father was a slave of Dan Bogie's, at Kirksville, in Madison County, and I was named for him. My mother's people were born in Garrard County as far as I know. I had one sister, born in 1860, who is now dead, and is buried not far from Lancaster. Marse Bogie owned about 200 acres of land in the eastern section of the county, and as far as I can remember there were only four slaves on the place. We lived in a one-room cabin, with a loft above, and this cabin was an old fashioned one about hundred yards from the house. We lived in one room, with one bed in the cabin. The one bed was an old fashioned, high post corded bed where my father and mother slept. My sister and me slept in a trundle bed, made like the big bed except the posts were made smaller and was on rollers, so it could be rolled under the big bed. There was also a cradle, made of a wooden box, with rockers nailed on, and my mother told me that she rocked me in that cradle when I was a baby. She used to sit and sing in the evening. She carded the wool and spun yarn on the old spinning wheel. My grandfather was a slave of Talton Embry, whose farm joined the Wheeler farm. He made shingles with a steel drawing knife, that had a wooden handle. He made these shingles in Mr. Embry's yard. I do not remember my grandmother, and I didn't have to work in slave days, because my mother and father did all the work except the heavy farm work. My Mistus used to give me my winter clothes. My shoes were called brogans. My old master had shoes made. He would put my foot on the floor and mark around it for the measure of my shoes.

Most of the cooking was in an oven in the yard, over the bed of coals. Baked possum and ground hog in the oven, stewed rabbits, fried fish and fired bacon called "streaked meat" all kinds of vegetables, boiled cabbage, pone corn bread, and sorghum molasses. Old folks would drink coffee, but chillun would drink milk, especially butter milk.

Old master would call us about 4 o'clock, and everybody had to get up and go to "Starring"[TR:?]. Old Marse had about 30 or 40 sugar trees which were tapped, in February. Elder spiles were stuck in the taps for the water to drop out in the wooden troughs, under the spiles. These troughs were hewed out of buckeye. This maple water was gathered up and put in a big kettle, hung on racks, with a big fire under it. It was then taken to the house and finished upon the stove. The skimmings after it got to the syrup stage was builed down and made into maple sugar for the children.

My grandfather, Jim Embry mended shoes and made fairly good ones....