Slave Narratives: a Folk History of Slavery in the United States From Interviews with Former Slaves Arkansas Narratives, Part 2 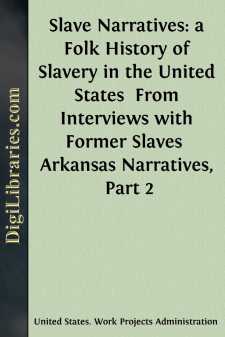 "I was born three miles west of Starkville, Mississippi on a pretty tolerable large farm. My folks was bought from a speculator drove come by. They come from Sanders in South Ca'lina. Master Charlie Cannon bought a whole drove of us, both my grandparents on both sides. He had five farms, big size farms. Saturday was ration day.

"Our master built us a church in our quarters and sont his preacher to preach to us. He was a white preacher. Said he wanted his slaves to be Christians.

"I never went to school in my life. I was taught by the fireside to be obedient and not steal.

"We et outer trays hewed out of logs. Three of us would eat together. We had wooden spoons the boys made whittling about in cold rainy weather. We all had gourds to drink outer. When we had milk we'd get on our knees and turn up the tray, same way wid pot-liquor. They give the grown up the meat and us pot-liquor.

"Pa was a blacksmith. He got a little work from other plantations. The third year of the surrender he bought us a cow. The master was dead. He never went to war. He went in the black jack thickets. His sons wasn't old enough to go to war. Pa seemed to like ole master. The overseer was white looking like the master but I don't know if he was white man or nigger. Ole master wouldn't let him whoop much as he pleased. Master held him off on whooping.

"When the master come to the quarters us children line up and sit and look at him. When he'd go on off we'd hike out and play. He didn't care if we look at him.

"My pa was light about my color. Ma was dark. I heard them say she was part Creek (Indian).

"Folks was modester before the children than they are now. The children was sent to play or git a bucket cool water from the spring. Everything we said wasn't smart like what children say now. We was seen and not heard. Not seen too much or somebody be stepping 'side to pick up a brush to nettle our legs. Then we'd run and holler both.

"Now and then a book come about and it was hid. Better not be caught looking at books.

"Times wasn't bad 'ceptin' them speculator droves and way they got worked too hard and frailed. Some folks was treated very good, some killed.

"Folks getting mean now. They living in hopes and lazing about. They work some."

"I member when they freed the people.

"We still stayed there on the place and I was settled and growed up when I left there.

"Yes ma'am, I member when they carried us to church under bresh arbors. Old folks had rags on their hair. Yes'm, I been here.