Sketches of the Fair Sex, in All Parts of the World 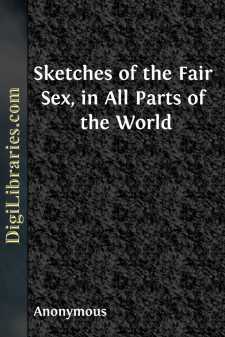 It is our design to present a pleasing and interesting miscellany, which will serve to beguile the leisure hour, and will at the same time couple instruction with amusement. We have used but little method in the arrangement: Choosing rather to furnish the reader with a rich profusion of narratives and anecdotes, all tending to illustrate the

to display its delicacy, its sweetness, its gentle or sometimes heroic virtues, its amiable weaknesses, and strange defects—than to attempt an accurate analysis of the hardest subject man ever attempted to master, viz—WOMAN.

It will be seen that we do not set down Woman as a cipher in the account of human beings. We accord to her her full share of importance in the world, and we have not attempted to relieve her from a sense of her responsibility as an accountable being. Above all, we have not failed to impress upon her the obligations she is under to Christianity, whose benign influences have raised her to be the companion and bosom-friend of man, [pvi] instead of his mere handmaid and dependant. It is religion that must form such a character as the following, which though applied by Pope to one of the most accomplished women of his time, is that of a Christian Wife in every age and station,—

“Oh! blest with temper whose unclouded ray Can make tomorrow cheerful as to-day: She who can love a sister’s charms, or hear Sighs for a daughter with unwounded ear; She who ne’er answers till a husband cools, Or, if she rules him, never shows she rules; Charms by accepting—by submitting sways,

By causing the character of woman to be more thoroughly discussed and better understood;—by making it more frequently the theme of rational meditation to the young and ardent, who, from the force of defective education, are apt to regard all “the sex,” beyond a very limited circle, as mere accessaries to animal enjoyment,—whose peace they may wound without compunction, and whose happiness they may peril without reflection,—we feel that we shall do both sexes a good service, and one for which as they advance in life, and in their turn become husbands, wives and parents, they will thank our little book, as having helped them to know themselves and each other.