Sketches of Japanese Manners and Customs 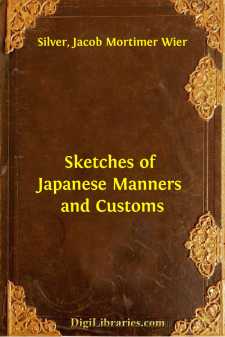 CHAPTER I. FESTIVALS AND HOLIDAYS.

The first feature of Japanese life that prominently presents itself to the notice of the stranger, is the number of festivals and holidays held in honour of the various deities, warriors, and sages, or in accordance with some ancient custom of the county, which is as paramount an authority as the most stringent of its laws. Of these festivals, the 'Oki-don-tako,' or 'Great Holiday,' which takes place about Christmas, and lasts a fortnight, is the most important. Previous to its celebration, it is customary with the people to settle accounts, and amicably adjust any quarrels or estrangements that may happen to exist; and they evince the same spirit that actuates Christian nations at this season, by a general interchange of presents and complimentary visits with their friends and acquaintance. So anxious are the merchants to take this opportunity of settling with their creditors, that, when the dealers have deficiencies to make up, articles are frequently pressed on foreign residents at the Treaty Ports at prices previously refused.

The 'Gogata Seku,' the emblems of which form the first subject of illustration, is also a festival of great importance: it takes place about the middle of June, which is the fifth month of the Japanese calendar, from which it derives its designation, and is kept up with more than ordinary spirit during the three days of its continuance. It is held in commemoration of Gongen Sama, the great general to whom the present dynasty owes its existence; and the Japanese date their births from this festival, even if born the day after its last celebration.

It has several curious symbols, the most striking being huge aerial fishes, in imitation of the 'koi,' or 'carp;' large crimson streamers, representations of Gongen Sama crushing a demon; and the heads and tails of crayfish, with which they decorate their dishes and the entrances of their houses. The floating fish flag is hoisted over every house in which a boy has been born during the preceding twelve months, and is emblematical of his future career. As the 'koi,' or 'carp,' which is very plentiful in Japan, finds its way up streams and rivers, surmounting all obstacles in its way, and rendering itself by its fecundity and edible qualities useful to the whole country, so the child is to make his way through life, boldly fulfilling his destiny, and proving himself a useful and beneficial member of the community. In the same way, the scarlet streamer indicates the birth of a female child, and the domestic nature of her duties. The crayfish are used to remind the people of their humble origin (it being traditionary that the empire originated from a race of poor fishermen), and the consequent necessity of humility, temperance, and frugality, in their different stations in life.

Various qualities are ascribed to the hero of this festival: he is considered the especial champion of women, for whose protection he instituted several laws and regulations; among others, making it obligatory on them to blacken their teeth on entering into the married state....