Sketches from Memory (From "Mosses from an Old Manse") 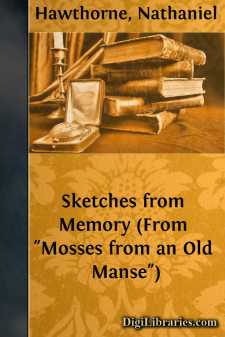 THE NOTCH OF THE WHITE MOUNTAINS.

It was now the middle of September. We had come since sunrise from Bartlett, passing up through the valley of the Saco, which extends between mountainous walls, sometimes with a steep ascent, but often as level as a church-aisle. All that day and two preceding ones we had been loitering towards the heart of the White Mountains,—those old crystal hills, whose mysterious brilliancy had gleamed upon our distant wanderings before we thought of visiting them. Height after height had risen and towered one above another till the clouds began to hang below the peaks. Down their slopes were the red pathways of the slides, those avalanches of earth, stones, and trees, which descend into the hollows, leaving vestiges of their track hardly to be effaced by the vegetation of ages. We had mountains behind us and mountains on each side, and a group of mightier ones ahead. Still our road went up along the Saco, right towards the centre of that group, as if to climb above the clouds in its passage to the farther region.

In old times the settlers used to be astounded by the inroads of the Northern Indians, coming down upon them from this mountain rampart through some defile known only to themselves. It is, indeed, a wondrous path. A demon, it might be fancied, or one of the Titans, was travelling up the valley, elbowing the heights carelessly aside as he passed, till at length a great mountain took its stand directly across his intended road. He tarries not for such an obstacle, but, rending it asunder a thousand feet from peak to base, discloses its treasures of hidden minerals, its sunless waters, all the secrets of the mountain's inmost heart, with a mighty fracture of rugged precipices on each side. This is the Notch of the White Hills. Shame on me that I have attempted to describe it by so mean an image, feeling, as I do, that it is one of those symbolic scenes which lead the mind to the sentiment, though not to the conception, of Omnipotence.

We had now reached a narrow passage, which showed almost the appearance of having been cut by human strength and artifice in the solid rock. There was a wall of granite on each side, high and precipitous, especially on our right, and so smooth that a few evergreens could hardly find foothold enough to grow there. This is the entrance, or, in the direction we were going, the extremity, of the romantic defile of the Notch. Before emerging from it, the rattling of wheels approached behind us, and a stage-coach rumbled out of the mountain, with seats on top and trunks behind, and a smart driver, in a drab great-coat, touching the wheel-horses with the whip-stock and reigning in the leaders. To my mind there was a sort of poetry in such an incident, hardly inferior to what would have accompanied the painted array of an Indian war-party gliding forth from the same wild chasm. All the passengers, except a very fat lady on the back seat, had alighted. One was a mineralogist, a scientific, green-spectacled figure in black, bearing a heavy hammer, with which he did great damage to the precipices, and put the fragments in his pocket....