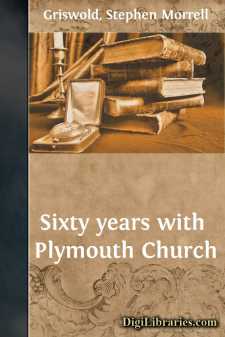 For some years past I have been repeatedly urged to record my recollections of Plymouth Church and Henry Ward Beecher. One after another the original members of the church have passed away until now I am almost alone, so far as the early church connection is concerned, and I have been told that there is really no one left who could give the personal value to such a record. At first, as I thought of the task, it appeared too great. Business duties pressed and left little time for such a work. Then out of the flood of recollections, which should I select? Recently a period of convalescence, following a somewhat serious illness, during which work was forbidden, gave me leisure which I occupied in recording such incidents as I thought might be of interest and value. These were arranged not in the form of history but as a series of sketches setting forth different phases of the church history and the church life, as well as illustrating Mr. Beecher himself as a preacher and pastor, but still more as a man. These are chiefly personal in their character. Fifty-three years of service as an usher in Plymouth Church brought me into closest touch with those services which have made Plymouth so well known not only in America, but throughout the world. Very precious are those memories to me, and as I have dwelt upon them, I have felt it not less a privilege than a duty to share them with others and thus bear testimony to a church life of great beauty and power.

he great metropolis of the East has ever had a great attraction for the sons of rural New England, and I was no exception to the rule. In 1851 I made known to my parents my ambition to see and know more of the world, and to this end I purposed to make my way to New York in search of fame and fortune—a wider horizon and a larger life. I had spent my uneventful days thus far on my father's farm, and both he and my mother were filled with dismay at my determination to go to what was, to them, a city of untold lawlessness and full of pitfalls, where an unsophisticated country youth like myself would be beset with many temptations on every hand, and be led away from the straight and narrow path of his upbringing by his godly parents. And truly the change would be great from the quiet home at Windsor in the beautiful valley of the Connecticut to the stir and bustle and crowds of a great city. So far as success in any business I might undertake or material gains were concerned, my parents were quite sure that the possibilities for advancement were hardly commensurate with the danger of discouragement and complete failure.

However, I had not spoken without careful thought, and when they saw how strongly I felt, and that I could not be content to live out my days on the farm, they consented to my going, though rather reluctantly; but it was what I wanted, and I did not feel that I was erecting a wall of separation which would shut me out of the home of my childhood; though I little thought how hard it would be to leave it when the time for my departure really came....