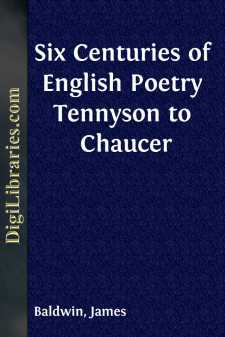 Select English Classics which the publishers have in course of preparation. The series will include an extensive variety of selections chosen from the different departments of English literature, and arranged and annotated for the use of classes in schools. It will embrace, among other things, representative specimens from all the best English writers, whether of poetry or of prose; selections from English dramatic literature, especially of the eighteenth and nineteenth centuries; choice extracts from the writings of the great essayists; selections from famous English allegories; a volume of elegies and elegiacal poetry; studies of English prose fiction, with illustrative specimens, etc. Each volume will contain copious notes, critical, explanatory, and biographical, besides the necessary vocabularies, glossaries, and indexes; and the series when complete will present a varied and comprehensive view of all that is best in English literature. For supplementary reading, as well as for systematic class instruction, the books will possess many peculiarly valuable as well as novel features; while their attractive appearance, combined with the sterling quality of their contents, will commend them for general reading and make them desirable acquisitions for every library.

TO TEACHERS AND STUDENTS.

There is but one study more interesting than the history of literature, and that is the study of literature itself. That the former should often be mistaken for the latter is scarcely to be wondered at when we consider the intimate and almost indivisible relationship existing between them. Yet, in truth, they are as capable of separate consideration as are music and the history of music.

Any careful investigation of the history of English poetry would naturally begin at a point of time some six or seven hundred years earlier than that of Chaucer. From such investigation we should learn that even as early as the ninth century—perhaps, indeed, the eighth—there were in England some composers of verse in the Anglo-Saxon tongue; that the songs of these poets were chiefly of religion or of war, and that being written in a language very different from our modern English they can scarcely be considered as belonging properly to our literature; that among them, however, is a noble poem, "Beowulf," the oldest epic of any modern people, which was probably sung or recited by pagan minstrels long before it was written down in permanent form; that, after the conquest of England by the Normans, the early language of the The Transition Period.English people underwent a long and tedious process of transition,—a blending, in a certain sense, with the Latinized and more polished tongue of their conquerors,—and that the result was the language which we now call English and are proud to claim as our own; that it was about three hundred years after the Norman Conquest, namely, in 1362, that this new tongue was officially recognized and authorized to be used in the courts at law throughout the land; and that about the same time Geoffrey Chaucer composed and wrote his first poems....