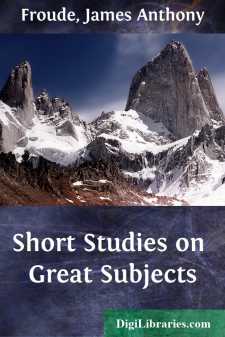 THE SCIENCE OF HISTORY: A LECTURE DELIVERED AT THE ROYAL INSTITUTION

Ladies and Gentlemen,—I have undertaken to speak to you this evening on what is called the Science of History. I fear it is a dry subject; and there seems, indeed, something incongruous in the very connection of such words as Science and History. It is as if we were to talk of the colour of sound, or the longitude of the rule-of-three. Where it is so difficult to make out the truth on the commonest disputed fact in matters passing under our very eyes, how can we talk of a science in things long past, which come to us only through books? It often seems to me as if History was like a child's box of letters, with which we can spell any word we please. We have only to pick out such letters as we want, arrange them as we like, and say nothing about those which do not suit our purpose.

I will try to make the thing intelligible, and I will try not to weary you; but I am doubtful of my success either way. First, however, I wish to say a word or two about the eminent person whose name is connected with this way of looking at History, and whose premature death struck us all with such a sudden sorrow. Many of you, perhaps, recollect Mr. Buckle as he stood not so long ago in this place. He spoke more than an hour without a note—never repeating himself, never wasting words; laying out his matter as easily and as pleasantly as if he had been talking to us at his own fireside. We might think what we pleased of Mr. Buckle's views, but it was plain enough that he was a man of uncommon power; and he had qualities also—qualities to which he, perhaps, himself attached little value, as rare as they were admirable.

Most of us, when we have hit on something which we are pleased to think important and original, feel as if we should burst with it. We come out into the book-market with our wares in hand, and ask for thanks and recognition. Mr. Buckle, at an early age, conceived the thought which made him famous, but he took the measure of his abilities. He knew that whenever he pleased he could command personal distinction, but he cared more for his subject than for himself. He was contented to work with patient reticence, unknown and unheard of, for twenty years; and then, at middle life, he produced a work which was translated at once into French and German, and, of all places in the world, fluttered the dovecotes of the Imperial Academy of St. Petersburg.

Goethe says somewhere, that as soon as a man has done anything remarkable, there seems to be a general conspiracy to prevent him from doing it again. He is feasted, fêted, caressed; his time is stolen from him by breakfasts, dinners, societies, idle businesses of a thousand kinds. Mr. Buckle had his share of all this; but there are also more dangerous enemies that wait upon success like his. He had scarcely won for himself the place which he deserved, than his health was found shattered by his labours. He had but time to show us how large a man he was—time just to sketch the outlines of his philosophy, and he passed away as suddenly as he appeared. He went abroad to recover strength for his work, but his work was done with and over. He died of a fever at Damascus, vexed only that he was compelled to leave it uncompleted. Almost his last conscious words were, 'My book, my book! I shall never finish my book!' He went away as he had lived, nobly careless of himself, and thinking only of the thing which he had undertaken to do.

But his labour had not been thrown away. Disagree with him as we might, the effect which he had already produced was unmistakable, and it is not likely to pass away. What he said was not essentially new. Some such interpretation of human things is as early as the beginning of thought. But Mr. Buckle, on the one hand, had the art which belongs to men of genius; he could present his opinions with peculiar distinctness; and, on the other hand, there is much in the mode of speculation at present current among us for which those opinions have an unusual fascination. They do not please us, but they excite and irritate us. We are angry with them; and we betray, in being so, an uneasy misgiving that there may be more truth in those opinions than we like to allow.

Mr. Buckle's general theory was something of this kind: When human creatures began first to look about them in the world they lived in, there seemed to be no order in anything. Days and nights were not the same length. The air was sometimes hot and sometimes cold. Some of the stars rose and set like the sun; some were almost motionless in the sky; some described circles round a central star above the north horizon....